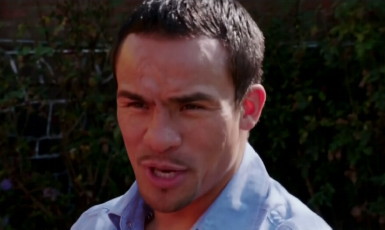 By Chris Williams: Bob Arum is meeting Juan Manuel Marquez for dinner tomorrow night to try and talk the Mexican warrior into taking a fifth fight with Manny Pacquiao in September. Arum envisions the fight bringing in huge pay-per-view and gate sales, and he’s anxious to get the 39-year-old Marquez to agree to the fight as quickly as he can.

Arum is fighting an uphill battle because Marquez has made it perfectly clear that he’s done with fighting the Filipino fighter and after knocking him cold last December in their fourth fight.

Marquez maintains that he’s beaten Pacquiao all four times, so it’s not necessary to keep fighting him over and over again. Marquez wants to move on and face Brandon Rios or someone else not named Pacquiao next.

However, it’s not realistic for Arum go beyond offering Marquez a 60-40 deal with Pacquiao taking the big money. Marquez is in a great position right now because he doesn’t care anymore, and Pacquiao and Arum are the ones that badly want this. Pacquiao got knocked cold, and he kind of needs to face Marquez in order to show his loyal fans that it was just a fluke thing. It wasn’t.

Marquez expertly waited for the wild Pacquiao to attack him last December, and he then dropped a right hand bomb that planked Pacquiao. I’d be surprised if Marquez is willing to take anything less than a 50-50 deal for a fifth fight, and he would have the right to ask for that big of a purse split because his Mexican fans helped contribute to making the fourth Pacquiao-Marquez fight such a huge success.

« Will Mayweather ever quit ducking (a.k.a fighting) the Best?