Abraham-Stieglitz face off on March 23rd in Germany 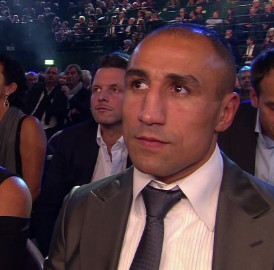 By Allan Fox: With a rematch against former WBO 168 pound champion Robert Stieglitz (43-3, 24 KO’s) taking place on March 23rd, WBO super middleweight champion Arthur Abraham (36-3, 28 KO’s) is getting a little more time as the champion before he’s going to have to face his #1 WBO challenger George Groves and give up the title.

Abraham isn’t going to hold onto his title through title defense, and it’s not surprising his dragging it out by putting it off as long as possible so that he can fight guys like Mehdi Bouadla and Stieglitz.

Abraham, 33, beat Stieglitz by a 12 round unanimous decision last year in August to take his title. Stieglitz, 31, has fought once since then, beating little known 2nd tier fighter Michal Nieroda by a 3rd round knockout in January.

With that fight out of the way, Stieglitz, who had a rematch clause with Abraham, will now face Abraham next month at the GETEC Arena, in Magdeburg, Germany.

For Stieglitz, #3 WBO, #12 IBF, it’s an opportunity to get a payday, but in real terms he has zero chances of beating Abraham. It was clear to everyone that saw the Abraham-Stieglitz fight last August that Stieglitz was too weak for Abraham.

I give Stieglitz a lot of credit for taking the punishment from Abraham for 12 rounds, but he didn’t have the talent to win the fight. Stieglitz did win some rounds late in the fight during garbage time when Abraham was resting up during some of the rounds.

That’s what Abraham. He takes every other round off times, and he comes out frantically trying to score a knockout. He couldn’t do that with Stieglitz, and had to be content with just winning the fight by a 12 round decision.

I don’t see the rematch being any different from their first fight. Abraham is going to pressure Stieglitz, back him up to the ropes, and work him over with vicious head shots. Stieglitz will fight back, but will be too weak to do anything with Abraham.

Klitschko-Pianeta on 5/4 in Mannheim, Germany »