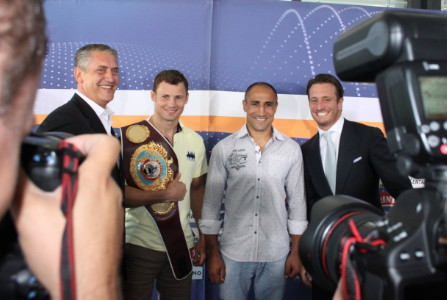 (Photo credit: Team Sauerland) By Allan Fox: Former WBO super middleweight champion Robert Stieglitz (43-3, 24 KO’s) got an easy 3rd round TKO victory last Saturday night over the inexperienced 22-year-old Michal Nieroda (10-3, 5 KO’s) in a tune-up bout at the Bon Pastor, Barcelona, Cataluña, Spain. The fight was halted at 1:45 of the 3rd round to give the 31-year-old Stieglitz the victory.

Stieglitz, #12 WBO, #12 IBF, will now be given a rematch against WBO super middleweight champion Arthur Abraham (36-3, 28 KO’s) on March 23rd at the Magdeburg, Sachsen-Anhalt, Germany. Hopefully, this is the last of the fights between Abraham and Stieglitz because this rematch is hardly necessary due to Abraham soundly beating Stieglitz by a 12 round unanimous decision last August by the scores of 116-112, 115-113 and 116-112.

The only reason they’re fighting again is because Stieglitz had a rematch clause in his contract for the fight, so fans are stuck watching them fight again. Abraham lucks out with this fight because it’ll keep him as the World Boxing Organization 168 pound champion for a little while longer.

Abraham doesn’t appear to be a risk taking champion, as in his first defense he fought and defeated fringe contender Mehdi Bouadla by an 8th round knockout last December instead of facing a higher ranked fighter, and now he’s getting a rematch with Stieglitz, which is also a very winnable fight for Abraham compared to if he were forced to fight his top challengers like George Groves, James DeGale, Lucian Bute, and Adonis Stevenson. Those would be really tough fights for Abraham if and when they happen, and it’s likely he would lost to most if not all of them.

Stieglitz didn’t have the size or the power to really do much with Abraham last year. The most Stieglitz could do was to outwork Abraham during the rounds that Abraham seemed to ease off to get a rest break.


« Judah still hoping to fight on February 9th; Garcia out with injury