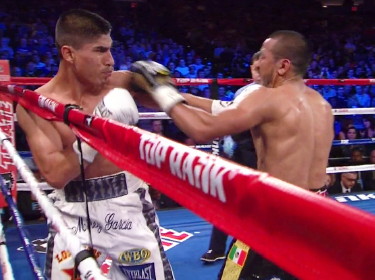 By Dan Ambrose: Robert Garcia, the trainer for newly crowned WBO featherweight champion Mikey Garcia (31-0, 26 KO’s), told RingTV he’s hoping that Yuriorkis Gamboa (22-0, 16 KO’s) will agree to accept the challenge made by Mikey to either come down to featherweight and fight him or fight him at a catch in 2013. Robert Garcia believes Mikey can beat Gamboa.

Whether Gamboa accepts the offer made by Mikey is unknown at this point but it likely will be determined by what happens with Gamboa’s negotiations for a fight with WBO welterweight champion Tim Bradley.

If Gamboa can get that fight then he won’t need the smaller payday fighters like Mikey. Even though is technically a world champion now, he’s a champion in a division that’s not a real big draw in boxing in the United States. Gamboa is doing the smart thing in trying to move up in weight to get the bigger money fights at welterweight.

Mikey should do the same, but it’s not likely he can do that because he’s too rail thin and he’s not blazing fast at only 5’6”. If he were to put on weight and fight at welterweight, it would only slow him down and he’d likely have problems.

It’s too bad Mikey didn’t fight for a world title at featherweight a couple of years ago when Gamboa was fighting regularly at that weight because Gamboa has missed a year with inactivity and he’s also moved up to super featherweight.

The only way I see Gamboa taking the fight with Mikey is if Top Rank throws some really ridiculous money at him to lure him into the fight. Will Bob Arum do that for a featherweight fight? I doubt it. I don’t see Gamboa being offer $1 million or anything close to that, so he’s better off moving up in weight.

« Pavlik says he might come out of retirement to fight

Robert Garcia: We would like Marquez for Brandon Rios »