Matthysse in action on 2/9 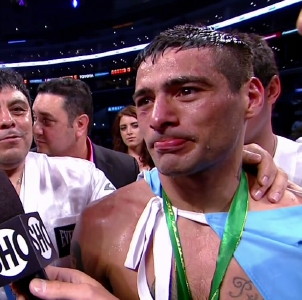 By Jason Kim: WBC interim light welterweight champion Lucas Matthysse (32-2, 30 KO’s) is scheduled for a fight in two weeks on December 15th in his native Argentina against a still to be determined opponent. Matthysse, 30, will then be back in the ring on February 9th on the undercard of the Danny Garcia vs. Zab Judah fight card televise on Showtime at the Barclays Center in Brooklyn, New York.

Matthysse also still doesn’t have an opponent for that date either. But being on that card is important for Matthysse, because he could be facing Garcia in the ring really soon. Matthysse is Garcia’s mandatory challenger, and he’s going to have to get around to fighting Matthysse sooner or later.

Garcia has been busy as of late being Erik Morales and Amir Khan, and he now has a fight scheduled against 35-year-old Zab Judah, the #1 IBF challenger. That’s probably going to be an even worse mismatch than the Garcia-Morales fight. But Garcia is going to have to face Matthysse sooner or later because the World Boxing Council can’t let Garcia bypass the Mattysse fight indefinitely without stripping him of the title.

Matthysse fought really well in his last bout, defeating #1 WBC Ajose Olusegun by a 10th round TKO last September in a real brawl of a fight. Matthysse showed both power and intelligence in getting a stoppage victory. This wasn’t an easy fight for Matthysse, however, because he had to take an awful lot of punishment in halting the tough as nails Ajose.

The December 15th fight will likely be against a soft opponent rather than a challenging one. There’s only two weeks to go, and Matthysse isn’t going to get a tough opponent on that short notice.

Mattysse wants to take on the top fighters in the division after losing two controversial decisions against Zab Judah and Devon Alexander in fights that many boxing fans felt that Matthysse should have won.

« Pavlik vs. Ward: Andre knows he’s going to be in tough – Kelly