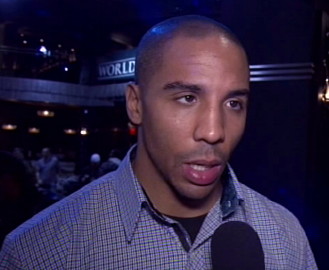 By Scott Gilfoid: The talented WBC/WBA super middleweight champion Andre Ward (26-0, 14 KO’s) plans on having a really busy 2013 by fighting three times in the year starting with a fight against former WBC/WBO middleweight champion Kelly Pavlik in February or March. Ward is really hoping that IBF champ Carl Froch and WBA champion Mikkel Kessler will finally want to get off their backsides and face him so he can whip them again, but Ward doubts they’ll accept his challenge.

Ward said to Sky Ringside “We’re looking to fight three times this year if everything goes well. Hopefully my first fight will be in February or March and I’m looking for big things this year. Kelly Pavlik is first. I think Froch and Kessler are made for each other.”

The Pavlik-Ward fight will no doubt take place, there’s no question about that fight. Pavlik badly wants to fight Ward, and he’s not just flapping his gums and name dropping to get a little attention from boxing fans to make him look like he’s in Ward’s class.

Pavlik actually wants to fight him and is ready to face him as soon as Ward’s injured shoulder heals up. I think Pavlik is going to lose as badly as Froch and Kessler did in their fights with Ward, maybe not quite as bad, but he’s going to definitely lose the fight.

With Kessler and Froch not likely to step up to the plate to fight Ward in 2013, I think Ward may have to settle for fights against the likes of Thomas Oosthuizen, Edwin Rodriguez, Lucian Bute, Darren Barker, George Groves or James DeGale.

Those are really disappointing fights for Ward, because none of them are even close to being in the same league as him and he’ll knock them all out or beat them by lopsided decisions, but Ward probably isn’t going to be able to get guys like Froch, Kessler or Lucian Bute to fight him right now because he’s just too damn good.

I see those guys continuing to fight each other instead of Ward in 2013, so Ward can forget facing those guys. I’d like to see Ward fight Groves and DeGale just for the heck of it to see how those young lads do but I think it’ll badly for them. Ward in another level altogether and those guys will enver get to that level because it takes supreme talent to get where Ward is at.

« Cunningham unhappy with loss to Adamek, feels he got robbed

Mayweather Jnr vs. Robert “The Ghost” Guerrero on May 4th »