Cunningham unhappy with loss to Adamek, feels he got robbed 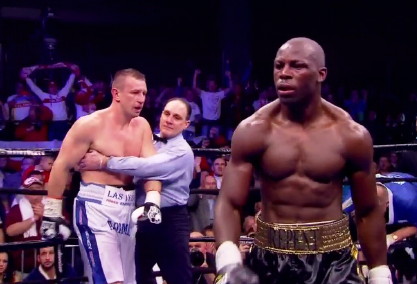 By Dan Ambrose: Former IBF cruiserweight champion Steve Cunningham (25-5, 12 KO’s) isn’t too happy about being on the receiving end of a controversial 12 round split decision loss to Tomasz Adamek (48-2, 29 KO’s) last night at the Sands Casino Resort in Bethlehem, Pennsylvania.

The decision by two of the judges to give Adamek the fight by the scores of 115-113 and 116-112, has really shaken up the boxing world because few people saw Adamek winning that fight and it’s pretty bad when you have judges that go against the mainstream opinion like in this fight. One of the judges gave Cunningham the fight by a 115-113 score, but his pick was cancelled out by the other two judges.

A lot of well-known boxing figures saw this as a clear cut win for Cunningham, people like Lennox Lewis, Chris Byrd, Freddie Roach, BJ Flores, Chris Mannix, Dan Rafael…etc. It goes on and on. If the International Boxing Federation is on their job they’ll review this fight and order a rematch because this was an IBF heavyweight eliminator position for the #2 spot.

Adamek, the winner, gets to move on and fight Kubrat Pulev for the #1 mandatory position. Getting aced out of being able to fight for that #1 spot really hurts a fighter like Cunningham because he fought his heart out and deserves the chance to be able to fight Pulev to get a title shot.

Cunningham said on his twitter “When you work hard, perform beautifully and get robbed, how can you not be mad, but you guys witnessed the truth and I am happy for that. Thanks for the support.”

In a perfect world, the IBF would order a rematch between Cunningham and Adamek to quiet down the controversy. However, I don’t see that happening here. Adamek will be able to keep his controversial win and then move on to fight Pulev.

« Quality Judging is the Foundation of Any Sport