Mayweather Jnr vs. Robert “The Ghost” Guerrero on May 4th 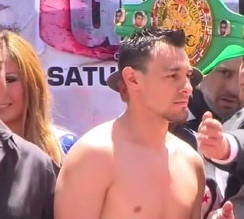 Robert Guerrero has stepped up and beaten two credible welterweights in Selcuk Aydin and Andre Berto in the last year and his last performance against Berto was probably the best off his career. Saul Alvarez in his last fight beat up a beefed up light welterweight in Josesito Lopez, and the fight before that beat up a well past his prime, old aging 40-year-old Shane Mosley in a 12 round unanimous decision. I don’t believe this is deserving of a massive payday in fighting the main money man of n boxing Floyd “money” Mayweather.

Guerrero deserves the fight against Floyd and of Saul Alvarez takes a hard fight on the undercard against someone like unbeaten WBA World junior middleweight champion Austin Trout and wins then get the fight with “Money” Mayweather in September. It’s common thought that Mayweather set aside the September date for a possible Manny Pacquiao fight but I doubt after Manny got knocked out cold by Juan Manuel Marquez.

Saul Alvarez will just have to wait his turn to get his first loss on his currently unbeaten record and “The Ghost” can earn some good money on may 4th.