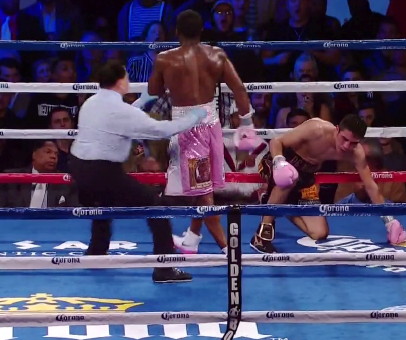 By Scott Gilfoid: Putting on a beautiful display of power punching, Adrien Broner (25-0, 21 KO’s) stopped WBC lightweight champion Antonio DeMarco (28-3-1, 21 KO’s) in the 8th round tonight to claim his World Boxing Council 135 pound title at the Boardwalk Hall in Atlantic City, New Jersey. Fight with a sense of calm, Broner knocked DeMarco down with a picture perfect left hook to the jaw in the 8th. DeMarco’s corner new better than to let the fight continue, so they motioned to the referee that they wanted the fight stopped.

The 4th, 5th and 6th rounds were especially brutal due to all of the short head shots that Broner landed. He set up shop on the inside and just stayed there. I don’t know DeMarco didn’t try and get to the outside because he was a beating in close, but that was his mistake. In the 6th. Broner hurt DeMarco was a nice body shot and I thought for a second there that the fight would be stopped but to DeMarco’s credit he kept fighting.

With this win Broner is now on a crash course with WBO lightweight champion Ricky Burns, who previously said he’d like to fight the winner of this fight. Well, we now know who the winner is and I’m wondering whether Burns will choose to fight Broner or will he continue to fight guys like Kevin Mitchell, Paulus Moses and Nicky Cook and avoid what is almost a guaranteed knockout loss or will he show courage and choose to take the fight? I honestly don’t see Burns taking the fight, not now, not ever.

There’s no way that Burns can beat Broner so I won’t blame Burns’ promoter one bit if he decides to keep him far, far away from Broner. I never for a second thought that Burns would ever fight Broner to begin with, but after this fight I’d say the chances are no pretty much zero of him fighting the young talented Broner. It’s much safer for Burns to stay in the UK fighting guys like Kevin Mitchell or Liam Walsh, once he heals.

Broner is destined for greatness so he doesn’t waste his time trying to chase down the non-popular fighters. I’d like to see Broner move up in weight now and go after Danny Garcia, Lucas Matthysse or Lamont Peterson at light welterweight. Those are the best fighters at 140. I don’t rate Amir Khan or Brandon Rios so I haven’t included them.