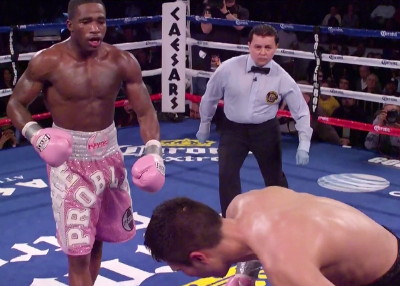 by Jim Dower: Adrien “The Problem” Broner (25-0, 21 KO’s) proved to have too much power, too speed and too much talent in giving WBC lightweight champion Antonio DeMarco (28-3-1, 21 KO’s) a terrible beating on Saturday night reminiscent of the one he received from Edwin Valero.

The fight was halted in the 8th round after Broner tagged DeMarco with a powerful left hook to the head that dropped him at the Boardwalk Hall in Atlantic City, New Jersey. DeMarco’s corner had seen enough and they immediately waived the white towel to have the fight stopped.

DeMarco’s face was swollen on the right side after the 1st round despite the fact that Broner really didn’t land that many punches. However, Broner quickly warmed up and was tagging DeMarco at will with big power shots on the inside the 4th round. DeMarco suffered a cut on the corner of his right eye in that round and he looked beaten. His corner kept asking him what was run in between rounds and it looked like they wanted to stop the fight more than once. However, DeMarco refused to quit and he dutifully went out round after round taking heavy punishment to the head and body.

In the 6th round, Broner hurt DeMarco with a hard right to the body and you could see DeMarco back up and wilt. But he was able to make it out of the round under a heavy assault from Broner.

Broner slowed down in then 7th and seemed to be catching his breath to load up. DeMarco fought a little bit better in that round, but not much. He was able to land punches but his power wasn’t there because Broner stayed in close and that prevented DeMarco from getting maximum leverage on his shots. When the action was on the outside, Broner was able to pick off many of DeMarco’s long shots, so he wasn’t have much success there either.

In the 8th, Broner suddenly came alive landing a four punch combination that took the air out of DeMarco. Broner then landed a hard left hook that put DeMarco down on knee. At that point DeMarco’s corner wisely waived the towel to have the fight stopped.

After the fight Broner told HBO’s Larry Merchant “I bake him, shake him, cook him and eat him. I knew coming into this fight that he [Demarco] would come to fight. He’s a world class fighter. I knew he wouldn’t have the skills or the will to beat me. I wanted to make a statement that anyone that fights Adrien Broner has stepped in doo doo that they can’t get off their shoe. I don’t care who I fight next. That’s up to my promoter.”