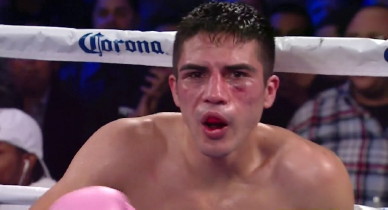 by Miguel Antonio “Miggs” Barragan: There’s a saying in the boxing world, that once it’s beaten out of you, it’s gone forever, and there’s no getting it back. Well they sure talk a lot, do they not? Oooh, I’m spitting fire. Could it be that be that last Saturday night we saw a boxer that no longer had it?

I talk about Antonio “Tony” DeMarcos’ (28-3-1, 28 ko’s) performance, or lack thereof, against recently cemented star Adrien “The Problem” Broner (25-0, 21 ko’s). And by “had it” I mean that killer instinct we’re used to seeing from Antonio DeMarco. Not only did “The Problem” have no problem disposing his opponent in 8 rounds, winning by TKO when Antonio’s corner threw in the towel, but he also dethroned DeMarco of his WBC Lightweight title, all in one fell swoop.

Adrien’s jab was present and the rest of his punching looked crisp and powerful, quite excellently I might even say. As was his defense, allowing DeMarco to land only 93 of 351 punches according to CompuBox. Overall he looked like he truly belonged in the spotlight, which as we all know by now, he has relished in for quite some time. Judging by his post fight interviews and aided hair combing. Antonio DeMarco on the other hand….not so much.

DeMarco started well, not getting hit too much and occasionally landing some body shots and one stiff left hand early in the bout worth noting. However beyond that, where was the rest of him? “Tonys” performance last Saturday eerily mirrored the performance of another “Tony”; Antonio Margarito, in his bout with Manny Pacquiao in June of 2010. On a smaller scale of course. Not only in their in ring performances, but also their game plan. What was it? What did they train eight or ten weeks to do?

Neither “Tony” used their unique size and frame to their advantage. Constantly hunching over and fighting inside, creating a closer target for their shorter opponents. Essentially handicapping themselves of their height advantage. In boxing terms, they didn’t “fight tall”. Paul “The Punisher” Williams was a shining example of tall lanky fighters not using their advantageous gifts.
If you’ve ever laced a pair of gloves and had any sparring experience, one would conclude, rather quickly, how tiring it becomes to punch up at a taller opponent.

Back in October of 2011, DeMarco was involved in a tooth and nail battle against skilled Venezuelan Jorge Linares. Late in the fight and behind on the score cards, DeMarco persevered through Linares versatile arsenal of punches to rally a comeback. Stopping Linares in the 11th round in a Round Of The Year candidate. Could this have been a negative turning point in DeMarcos career? Even in victory? Two fights, and six rounds later, we have last Saturdays bout with Broner, in what was a painful reminder that the truth comes real quick in the boxing ring. It’s like the truth serum of our sport…..or something.

Anyway, DeMarco showed heart in taking the punishment that he did, before finally being TKO’d in the 8th. But where was that killer instinct we saw in his come from behind victory against Linares prior to that 8th round? Or hell, at least the blitzkrieg we witnessed again John Molina Jr? As South Korean pop artist PSY would say, Vitor Belfort style. At least I think that’s what he says.
Could it be that, even in victory, Antonio DeMarco left something in the ring the night of the Linares bout that he’ll never regain? Because it certainly was not in the house, or ring, against Broner. And if DeMarco didn’t realize what he was doing lacking killer instinct, where was his corner to help? Those are the kinds of things corner men tell their fighters. Look, you’re doing so and so wrong, do this to correct it, etc. What was DeMarcos’ game plan coming into this fight?

He had some level of success fighting from outside. Hell, he even won a round on HBOs unofficial official Harold Lederman’s scorecard. What reason did he have for electing to fight inside, ultimately assisting Broner in effectively landing 216 of 373 power shots. That’s over 50% of Broners power shots landing. With those kinds of number, it was as if Broner had a sparring partner in front of him, sometimes, even a punching bag.

There were times when Antonio literally stood in the pocket, unwilling to throw a single punch. What was DeMarco thinking or waiting for?

Not taking anything away from a technically superb boxing clinic of from Broner against what was supposed to have been his toughest test to date in DeMarco. He knew what he had to do, and if DeMarco was more than willing to cooperate, Broner made no quarrels about snatching the opportunity. Morpheus once told Neo “I can only show you the door, you’re the one that has to walk through it”. DeMarco certainly showed Broner the door, and Broner stampeded right through it.

In case you missed any of last Saturdays action, HBO will be replaying the broadcast Sunday 11/18 and Monday 11/19. Check your local listings for more details.

Seth Mitchell gets stopped in two by Banks »