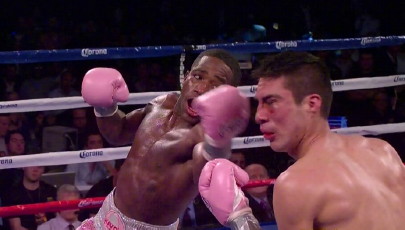 By Eric Thomas: WBC lightweight champion Antonio DeMarco (28-3-1, 21 KO’s) took a lot of heavy punishment in losing his title to lightweight newcomer Adrien Broner (25-0, 21 KO’s) on Saturday night in a mostly one-sided fight on HBO at the Boardwalk Hall, in Atlantic City, New Jersey, USA. DeMarco started off well but then fell apart under the power and the deadly accuracy of the 23-year-old Broner.

In the 8th, DeMarco took a knee when he was hit with a hard left hand from Broner that had a lot of power on it. By then DeMarco had already had about enough, as his face was cut and badly swollen from Broner’s shots.

DeMarco showed good power but he wasn’t able to keep the fight on the outside where his power is a lot more devastating. Broner basically walked him down and lured DeMarco into a close up war where both guys took turns trading punches. That kind of fight was much better for Broner because he was able to land with bigger power and the shots took a lot out of DeMarco. You could see it by the 4th round that DeMarco wasn’t going to last long. It’s surprising that he was able to make it to the 8th because he was hit by a lot of hard shots in the 4th though 7th rounds.

In something of an upset, Johnathon Banks (29-1-1, 19 KO’s) stopped Seth Mitchell (25-1-1, 19 KO’s) in the 2nd round of their WBC semi final eliminator. Banks, 30, the new trainer for IBF/IBO/WBA/WBO heavyweight champion Wladimir Klitschko, knocked Mitchell down three separate times in the 2nd round before referee Eddie Cotton halted the fight at 2:37 of the round following the third knockdown of Mitchell.

Banks immediately backed Mitchell up against the ropes with a series of hard shots. Banks then knocked Mitchell down with a final left hand to the head. The fight was then stopped at that point by referee Eddie Cotton.

It’s not surprising that Banks was able to stop Mitchell because in his last fight against Chazz Witherspoon, a 2nd tier heavyweight, Mitchell had been badly staggered in the 2nd round by Witherspoon.

Banks now could possibly get a title shot against WBC heavyweight champion Vitali Klitschko next year or Banks could fight one of the top contenders in a final WBC eliminator bout.

Other boxing action on the undercard:

« Froch wins in three over Mack: who’s next?