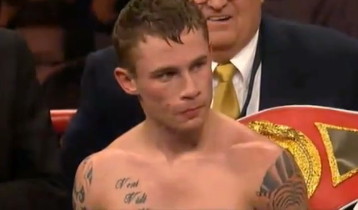 By Scott Gilfoid: Commonwealth and IBF Inter-Continental super bantamweight champion Carl Frampton (15-0, 10 KO’s) is looking to take on either Scott Quigg or Rendall Munroe next after defeating former IBF super bantamweight champion Steve Molitor (34-3, 12 KO’s) by a 6th round TKO last Saturday night at Odyssey Arena, in Belfast, Northern Ireland, United Kingdom. Frampton, 25, sees himself as being close to getting a world title shot against one of the champions.

Frampton said after the fight “I’m open to fighting Scott Quigg or Rendall Munroe, but I’m not far from a world title shot. So whatever happens first, I’ll leave it up to Eddie [Hearn] and Barry [McGuigan].”

I don’t see Frampton getting a fight against Quigg or Munroe because they’re looking to fight each other again to iron out the mess of their fight last June. So Frampton definitely won’t be getting either of those guys. As far as a world title shot goes, Frampton is ranked at the bottom of the International Boxing Federation super bantamweight rankings and un-ranked by the other sanctioning bodies.

Frampton isn’t going to get a shot at IBF/WBO champion Nonito Donaire because he’s only interested in taking on guys with high rankings and/or a title. Frampton is currently at the very of the IBF rankings, so he’s out. WBC champion Abner Mares has a fight against an arguably much better fighter than Frampton in Anselmo Moreno in November, so Frampton can pretty much forget about Mares as an option. That leaves only WBA champion Guillermo Rigondeaux, but do really think it’s a good idea to throw Frampton in with Rigondeaux at this point in Frampton’s career?

Rigondeaux would likely destroy Frampton as quick as he did Willie Casey in March of last year in Ireland. Heck. it would be like a rematch of Rigondeaux and Casey if Rigongdeaux were to fight Frampton. Okay, so Rigondeaux is probably out as well. That leaves Frampton with not much in the way of options for his next fight. He’ll have to dig up another old champion like Molitor that is showing bad signs of slipping like Molitor was. Who’s out that is faded that won’t be a big risk to beating Frampton? I don’t know but you can bet it’ll be another fringe contender.

I wasn’t impressed at all with Frampton’s win over Molitor. He’s too wide open to getting hit, not powerful enough, too slow and not skilled enough to beat the likes of Rigondeaux, Nonito Donaire, Wilfredo Vazquez Jr., Rico Ramos, Ricardo Cordoba or Toshiaki Nishioka.

Scott Harrison not ready for Burns »