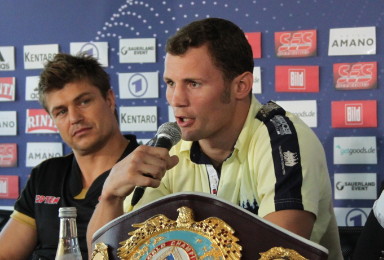 (Photo: Team Sauerland) By Allan Fox: Arthur Abraham (34-3, 27 KO’s) is in a do or die fight tonight against WBO super middleweight champion Robert Stieglitz (42-2, 23 KO’s) at the O2 World Arena in Berlin, Germany. Abraham, 32, has failed in almost every important fight since moving up in weight from the middleweight division in 2009.

Having failed against Carl Froch, Andre Dirrell and Andre Ward, Abraham now will be trying to capture the World Boxing Organization 168 lb title off of arguably weakest link among the three super middleweight title holders in 31-year-old Stieglitz. If Abraham can’t beat Stieglitz then he’s going to have to make a decision about where to go from here.

Abraham can possibly drain himself to move back down to 160 to try and get a big money fight against the likes of WBC middleweight champion Julio Cesar Chavez Jr, Felix Sturm, Gennady Golovkin or Dimitry Pirog or he can stay at super middleweight and be content with being able to beat most of the contenders and getting title shots every 1 to 4 years.

Abraham, 5’9″, probably doesn’t have the size to move up to the light heavyweight division to face bigger fighters like Chad Dawson, Tavoris Cloud, Beibut Shumenov and Nathan Cleverly. He’s already said that just adjusting to the bigger super middleweights was hard enough for him. You can’t imagine that Abraham will be able to do well against even bigger fighters than them.

At his weight, Abraham won’t be able to fight at middleweight for more than one or two fights without being too weakened from taking off weight. Coming down from 190 to 160 is really hard on Abraham. He’s not like Chavez Jr. who can effortlessly strip down from the 180s to 160 each time he fights, and then rehydrate back up to fight in his 180s against smaller middleweights. Abraham will be lucky if he can make weight at all period for any middleweight bouts.

Cotto or Marquez have good chance to face Pacquiao next »