Abraham to show his power against Stieglitz 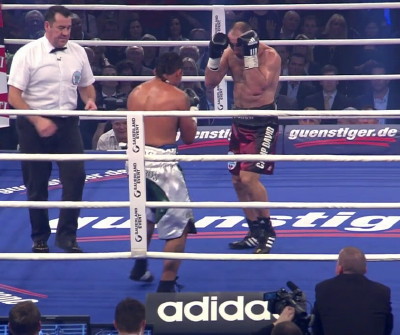 By Allan Fox: Arthur Abraham (34-3, 27 KO’s) may have looked bad in losing three out of four fights in the Super Six tournament, but he’s really shined since getting out of the tourney and is doing a nice job of rebuilding his career with two straight wins. This month, Abraham will be rewarded by getting a shot against WBO super middleweight champion Robert Stieglitz (42-2, 23 KO’s) in Berlin, Germany.

Abraham wants boxing fans to know that he’s a better fighter than he showed in the Super Six tournament and he plans on showing the fans by defeating Stieglitz in style later on this month. It might not be quite as easy as it was for Abraham in his last to fights against Pablo Farias and Piotr Wilczewski, because Stieglitz has better power and boxing skills than those two. However, Abraham definitely has the power advantage in this fight and if he can hurt Stieglitz this could be an easy fight for him.

For Abraham to make sure he wins this fight he’s going to have to put a lot of pressure on Stieglitz to try and wear him down in the same way Librado Andrade did in beating Stieglitz in 2008 in an 8th round stoppage. Stieglitz has improved since then in winning his last 11 fights. However, he also hasn’t fought anyone with the kind of power that Abraham has and that’s made things a lot easier for him.

Stieglitz will have to change his game around for this fight if he wants to win it, because he won’t be able to pressure Abraham the way he’s pressured his other opponents. It’s going to be Abraham that does the pressuring in this fight and Stieglitz is going to have to get on his bike to keep from getting blasted out. Stieglitz is clearly the much better boxer of the two, but he’s going to have to show a good chin to get past Abraham.

Chavez Jr. will take a ton of punishment against Sergio Martinez win or lose »