Abraham: The Stieglitz fight is a last chance for me 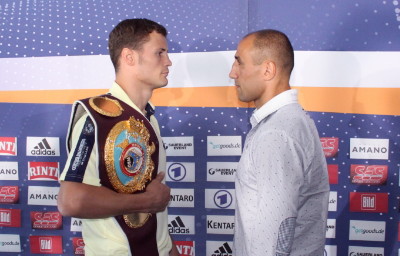 (Photo: Team Sauerland) By Jason Kim: 32-year-old Arthur Abraham (34-3, 27 KO’s) sees his fight this Saturday night against WBO super middleweight champion Robert Stieglitz (42-2, 23 KO’s) as potentially being a last chance for him to try and capture a world title when he meets the 31-year-old Stieglitz at the O2 World Arena, Kreuzberg, in Berlin, Germany.

Abraham has failed badly in fights against the best fighters at super middleweight, and yet he’s still being given another chance after beating a couple of fringe contenders in Pablo Farias and Piotr Wilczewski. Abraham hasn’t had to fight any really dangerous guys to get another title shot, and it’s going to be a real test to see if he can get past Stieglitz.

Abraham said “From this point onwards, every fight is going to be a last chance for me.”

Abraham has a puncher’s chance in this fight, and that’s about it. He can’t match Stieglitz’s boxing ability, and he likely won’t be given rounds if all he can do is try and turn it on in the waning seconds of every round. Of course, this fight is taking place in Germany where Abraham is a big star. He might be able to pull out a decision just by opening up with flurries in the last seconds of each round, but that’s not a given.

Abraham is pretty wild and most of his shots miss badly when he’s letting his hands go to try and steal rounds. If the judges are looking at what is actually landing, they might not give Abraham too many rounds int his fight because he tends to miss an awful loss when he opens up.

Abraham is going to have to try and get Stieglitz out early, because if he lets the champion get confidence he could make things very tough for him. In some of Abraham’s losses he’s seemed to give up after falling behind early. We saw that in his defeats against Andre Ward and Carl Froch where Abraham just looked depressed by the mid-point of the fight and seemed to stop trying as hard. He can’t afford to let that happen against Stieglitz, because he’ll surely lose the fight unless somehow the judges give him a hometown decision.

« Robert Guerrero: I’ll shock the world if I can get Mayweather Jr in the ring