Pavlik to test himself against Rosinsky on Saturday 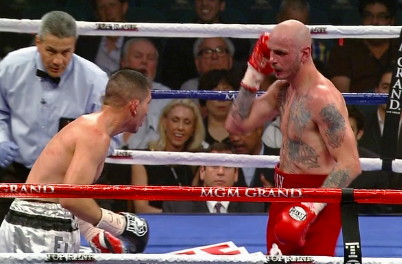 By Jason Kim: Bob Arum would like to move former WBC/WBO middleweight champion Kelly Pavlik (39-2, 34 KO’s) up against better opposition so that he can continue as before in getting big fights and making good money.

Before that can happen, Pavlik will have to prove that he can get to that level by facing prospect Will Rosinsky (16-1, 9 KO’s) in a 10 round bout at the Home Depot Center in Carson, California.

Pavlik has missed out on big fights against Lucian Bute and Paul Williams in the past, either not able to take the fights due to injuries or simply saying no to them. Pavlik has also had problems with alcohol, and that slowed his career down as well. He’s now living and fighting in California and training with Robert Garcia. It’s unclear at this point whether Garcia will be able to make enough improvements in order for Pavlik to be one of the major players at in the super middleweight division.

Right off the bat, there are a few fighters that Pavlik probably can’t hang with no matter how much he improves. He’s not going to beat Andre Ward, and you can probably say the same thing about Carl Froch and Mikkel Kessler. Those fighters have power and excellent boxing skills. They’re not like the limited fighters that Pavlik built his record on at middleweight. Perhaps the best we can hope for from Pavlik is to maybe win one of the paper titles like the WBO belt held by Robert Stieglitz. That’s a goal that Pavlik could achieve if he’s able to get past Rosinsky on Saturday.

Pavlik will have the power advantage in this fight against Rosinsky, and that’s obviously going to help a lot. He probably won’t be able to beat Rosinsky by boxing him or trying to outwork him, because Rosinsky appears to be better than Pavlik in those areas.

« Tony Thompson looking to score an upset against Wladimir on Saturday

Haye looking to be the first to KO Chisora »