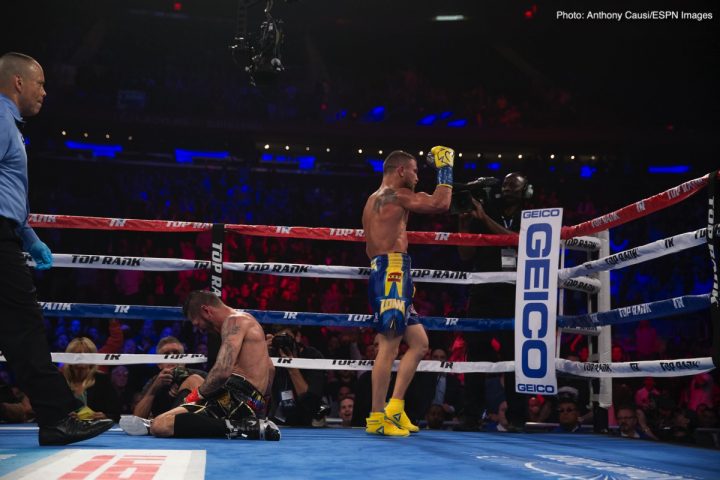 By Jim Dower: Former middleweight champion Kelly Pavlik is picking WBC lightweight champion Mikey Garcia to defeat Vasyl Lomachenko if the two of them face each other in a unification fight this year.

Pavlik says Mikey’s size, power, ring IQ and his counter-punching ability could prove to be too much for the 30-year-old Lomachenko (11-1, 9 KOs), who struggled in beating WBA lightweight champion Jorge Linares (44-4, 27 KOs) by a 10th round knockout last Saturday night at Madison Square Garden in New York.

Lomachenko was knocked on the seat of his pants in the 6th round after carelessly walking into a right hand. Pavlik thinks Mikey’s power will be a huge problem for Lomachenko if the two tangle.

“Mikey Garcia is a very talented fighter,” former middleweight champion Kelly Pavlik said to Fighthype. “Garcia is very smart in the ring, and the longer the fight goes the better Mikey Garcia is. Garcia can adapt to anything in the ring. He’s very solid, so he doesn’t leave himself open.”

There’s a very good chance that Garcia will catch Lomachenko with a big enough shot to knock him out no matter how much movement and angles he uses against him. Mikey only needs to move slightly to deal with the angles that Lomachenko will be presenting to him. Mikey’s power will be a problem even if he’s not in the ideal position to load up with everything.

Lomachenko’s promoter Bob Arum of Top Rank remains his ace in the hole. The 86-year-old Arum is already talking down the fight, and he says he’ll walk away from the negotiations if Mikey gives him any problems. The way Arum is talking, it almost seems like he doesn’t really want to make the Lomachenko-Garcia fight for some reason.

You would have to believe that he would be the next opponent for Lomachenko if he gets past Beltran. With those two fights being the ones that Arum wants, it seems that Mikey will not be an option for Lomachenko in 2018. Arum also spoke of wanting to make a rematch between Lomachenko and Jorge Linares.

The question is will Arum make Mikey have to wait behind a rematch with Linares as well as the Pacquiao and Beltran fights. If that’s the case, then Mikey could be waiting until mid-2019. Arum will eventually run out of options to match Lomachenko, and he’ll have to make the fight at that point.

If Arum has no patience for the negotiations with Mikey Garcia, then that fight could take years before it eventually happens. It took 6 years for the Manny Pacquiao vs. Floyd Mayweather Jr. fight to take place.

”I don’t think Lomachenko has got the power,” Pavlik said. ”I think it would be a very interesting fight and a close fight. I almost have to go with his size advantage and boxing knowledge that he has. Mikey very rarely makes mistakes, and Mikey has good footwork. Footwork doesn’t have to be flashy,” Pavlik said.

Lomachenko doesn’t have the power to hurt Mikey, but if he connects with enough shots, he could hurt him and score a stoppage victory. Lomachenko will likely be trying to land body shots the way he did against Linares. Of course, if Lomachenko lowers his head to throw to the body of Mikey, he’ll leave himself wide open to getting hit with one of his big shots. The shot that Linares knocked Lomachenko down with in round 6 would be a potential knockout blow if Mikey was the one that lands the shot. Lomachenko will have to possess a great chin for him to be able to withstand Mikey’s power shots for the entire fight.

Mikey didn’t knockout his last two opponents Adrien Broner and Sergey Lipinets, but those fights took place at light welterweight at 140, and his power obviously didn’t carry up with him to that division. For the Lomachenko and Robert Easter Jr. fights, Mikey will be back at 135, meaning his power should be more effective in this weight class than it was at 140. We’ll have to see how good Mikey’s power is when he faces IBF lightweight champion Robert Easter Jr. in his next fight. That’s the fight that Mikey will be taking next, and Easter Jr. is a good fighter, with a lot of height, excellent punching power, who has never been knocked out before.

Mikey will be giving away 4 inches in height and reach to Easter Jr. It’s not a forgone conclusion that Mikey will get past Easter Jr. That’s a tough fight. Easter Jr. isn’t over-the-hill like Adrien Broner, and he’s got a lot going for him right now.

“You want to move up in weight against Mikey Garcia. That might have been a warning to him that this is a weight he should stay at,” ESPN commenter Teddy Atlas said fighthub.

Atlas doesn’t seem to be aware that Mikey has vacated his IBF light welterweight title, and has moved back down to 135. He’s no longer talking about wanting to fight at 140 or 147. Mikey’s recent fight against Sergey Lipinets seems to have convinced him that he’s not cut out for the 140lb weight class. Mikey hasn’t admitted it, but it seems like he’s given up on fighting at light welterweight after the tough time he had with Lipinets.

Some of what Atlas says about Mikey is debatable, especially the part about him having the “second best legs in boxing and being a “better fighter than Linares.” Mikey is the more powerful puncher than Linares, and he’s arguably more suited to beating the better fighters at lightweight than he is. Mikey’s punching power and counter punching ability gives him a chance of beating Lomachenko that Linares didn’t have due to him not being a tremendous puncher. Lomachenko took a lot of punishment in his fight with Linares. All you need to do is look at Lomachenko’s face afterwards to know that this was not an easy fight for him.

Lomachenko wasn’t able to showboat the way he’d been doing lately, and he lost the cocky look to his face that we’d been used to seeing. The look in Lomachenko’s eyes was that of worry throughout the fight. Each time Lomachenko started to get a little cocky, Linares would nail him with a right hand and that look of worry and confusion would be back on his face. Mikey has the ability to do the same thing against Lomachenko, as long as he doesn’t stress out from his pressure. Mikey seemed bothered by the pressure from Adrien Broner and Sergey Lipinets in the second half of those fights. Mikey didn’t look like the same fighter he’d been in the first half.

”Fighters like Triple G, he gets himself in position at the right time, and that’s what Mikey does. Mikey showed that in the Adrien Broner fight,” Pavlik said.

If Mikey can deal with the movement and punching angles of Lomachenko, then he’s going to have a very good chance of beating him. Linares’ movement is the biggest thing Mikey will need to deal with. Orlando Salido wasn’t bothered at all with all the movement that Mikey was using. He ignored it focused on throwing to the body. No matter how much movement that Lomachenko used, he couldn’t get out of the way of Salido’s body shots, because he was able to loop the shots in a way that allowed him to still land even when Lomachenko was trying to dodge them. That fight was more one-sided than the judges’ scores that were turned. Mikey might need to knock Lomachenko out though to be sure that he gets the victory in the fight. Mikey will be the B-side in the promotion, as Lomachenko’s promoters at Top Rank will likely be the lead promoters of the event, and of course it’ll be on ESPN. Mikey fights on Showtime. That’s going to be a hurdle as well that the management for the two fighters will need to get past for the Lomachenko vs. Mikey fight to take place. 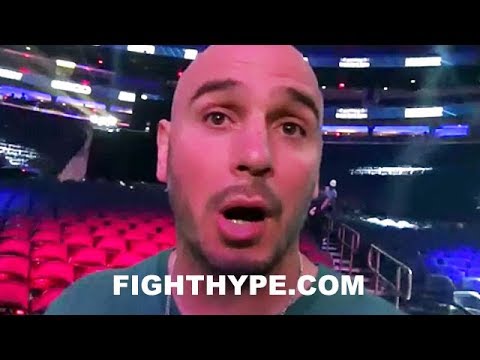