Pavlik can’t afford to lose to Rosinsky on Saturday 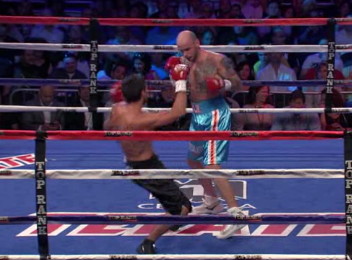 By Jason Kim: Former WBC/WBO middleweight champion Kelly Pavlik (39-2, 34 KO’s) has done a great job of putting together three straight wins over weak competition to come back from a crushing 12 round decision loss to Sergio Martinez two years ago. Pavlik is now facing his best opponent since then in Will Rosinsky (16-1, 9 KO’s) on Saturday night on HBO at the Home Depot Center, in Carson, California.

Pavlik will be seen by a lot of boxing fans in the United States and this is the fight to show them that he’s not a shot fighter like a lot of boxing fans view him. Pavlik has to win this fight and win it impressively for him to get a bout against a big named opponent in the fall. His promoter Bob Arum is saying he’ll match Pavlik against a big name next, but he’s got to win this fight and definitely he’s got to shine.

Pavlik’s opposition has been weak in his last two fights, so it’s hard to see whether he’s improving or not. He didn’t look all that great in his last fight against Scott Sigmon, but then again Pavlik said h toyed with the guy because he wanted to get in some rounds to get the rust off.

Rosinsky isn’t just a typical fodder opponent for Pavlik. This guy has got the size, power, youth and work rate to give Pavlik a ton of problems. If Pavlik can’t get Rosinsky out of there on Saturday night, we could see a big upset. Rosinsky, of course, will have to get out of the way of Pavlik’s biggest shots because it’s next to impossible to stand in there and get hit by a big puncher like Pavlik for 12 rounds without getting taken out. But Rosinsky has good defensive skills, and he should be able to get out of the way of enough of Pavlik’s bombs to make this a potentially difficult fight for him.

« Carson Jones: I feel sorry for Brook on July 7th

Aydin will be a big test for Robert Guerrero »