Sexton: My speed will give Price problems 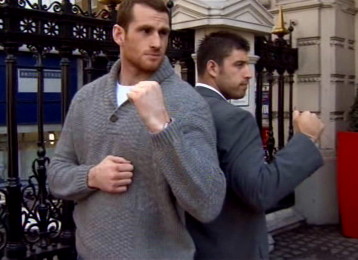 By William Mackay: David Price (12-0, 10 KO’s) takes his biggest test of his career on Saturday night in a fight against the durable and tough Sam Sexton (15-2, 6 KO’s) in a 12 round bout at the Aintree Equestrian Centre, in Liverpool, UK. The British heavyweight title will be up for grabs for the fight, but a lot more will be at stake than just the domestic level title.

Price is considered a can’t miss future champion by some, and a guy with as much hype about him as Price has must get by a fighter Sexton with no problems. There can’t be any trip ups at this level, because Sexton is a domestic level heavyweight, not a world class guy.

Sexton told the BBC “I know how boxer’s minds work, and I know how David’ mind will be working right now. He’s worried about his fight as well. He knows he’s never been against anyone with my speed and movement. He knows I’m going to cause him problems.”

I don’t know about Price being worried about Sexton’s speed and movement, because as far as I can tell, Sexton looks pretty slow to me. He also doesn’t move well around the ring. He’s more of a lead-footed guy with a good jab, a halfway decent left hook and a moderately powerful right hand. Sexton isn’t much of a threat, but it might not take much for him to topple Price because he’s got a weak chin and has been blasted out in the past in the amtuer ranks when attacked with power shots.

Price will likely do what he always does by going after Sexton immediately and looking to mow him down in the first couple of rounds. Price is completely predictable in the way he fights at this level.

Price rushes out and tries to KO everyone as early as possible. He’s not doing much in terms of working on skills that he’ll need later on when he finally faces a quality opponent for the first time. I imagine Price will hope he can KO that fighter when the time comes, but I suspect he’ll struggle badly, run out of gas and get knocked out. It might take a KO loss for Price for him to realize he needs to learn how to pace himself and learn how to box rather than just looking for a quick KO each time out.

« Odlanier Solis weighs in at a fat 267.5lbs for Airich fight