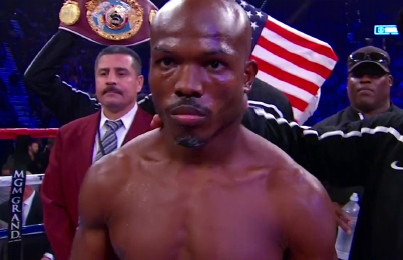 By Chris Williams: Tim Bradley is reportedly on a veggie diet to cut weight for his June 9th fight against WBO welterweight champion Manny Pacquiao. But never fear, this is merely routine protocol for the 28-year-old Bradley, who according to the RingTv, often goes on a veggie diet before his fights to cut weight quicker.

Bradley walks around at over 160+ pounds of pure muscle, so a lean diet helps him trim off extra muscle he doesn’t need. It also makes him quicker and in this fight against Pacquiao, Bradley will need all the speed he can get in order to match Pacquiao’s hand speed.

The diet doesn’t weaken him, and that’s a good thing because some fighters complain that veggie diets cause them to lose strength. In Bradley’s case, it doesn’t matter because he’s not likely going to win this fight by a knockout anyway. He just needs to focus on speed and his boxing ability for him to get a win. Bradley can beat the Filipino star by staying busy and taking the fight to him. Pacquiao’s weakness is his legs, stamina and midsection.

Those are the areas where he’ll break down in this fight. Bradley just has to make it a point to set a high pace and focus on landing as many hard shots as possible downstairs when the opportunity presents itself for him. Pacquiao’s stamina problems will likely come to the surface soon enough on their own. He’s an aging fighter and not used to being pushed at a fast pace due to all the catchweight fights and the fights against past their prime fighters that his promoter Bob Arum has put him in in the last three years.

With Bradley, he’s just got to push Pacquiao hard like he did against 40-year-old Joel Casamayor last time out, and he’ll do really well.