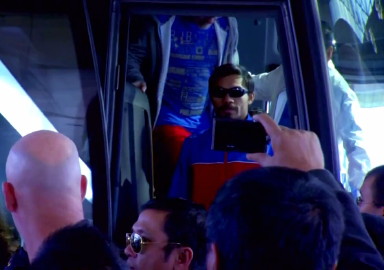 By Chris Williams: Last night on Friday Night Fights, EPSN2 analyst Teddy Atlas came right out said that Manny Pacquiao’s promoter Bob Arum will NEVER let Pacquiao fight Floyd Mayweather Jr. because it would mean that Arum would have to share the promotion and risk losing his gravy train fighter. Atlas also said that Pacquiao would be better off dumping Arum so that he wouldn’t have to share his promotional money with the promoter.

Here’s some of what Atlas said on the subject of Arum and Pacquiao on ESPN:

“Bob Arum’s not going to let the fight [Pacquiao vs. Mayweather] happen. He’s [Arum] the money guy. He’s the guy that makes all the money. If Pacquiao was really smart, he’d do what De La Hoya did, which was really a smart thing. He’d go and promote himself, because he [Pacquiao] doesn’t really need a promoter…and instead of making $15 to $20 million a fight, he’d make what Arum makes. He’d make $50 million, $60 million, because he’d control the whole pie. Arum controls the whole pie. If he puts his fighter [Pacquiao] in with Mayweather, he doesn’t control the whole pie. He has to share the promotion. He’s not going to share the promotion. He’s not going to share things. It’s a bad business move for him. He’s a smart guy. He graduated from Harvard. He’s a good business man. He makes money…He’d rather keep Pacquiao in fights for $20, $25 million dollars instead of having to pay him $60 million, and maybe lose the golden goose that lays the golden eggs. And again, not control the whole promotion. The fights [Mayweather-Pacquiao] not happening.”

Wow! I agree with Atlas in his belief that Arum doesn’t want to lose his golden goose by putting hjim in with Mayweather and watching him possibly get stomped. Arum would get one big payday, but then paydays might go downhill after that because no way would Pacquiao get a good percentage cut of the revenue with Mayweather in a rematch, not after loses to him the first time. And once Pacquiao loses twice to Mayweather, you can bet there will be a lot fewer boxing fans interesting in paying to see Pacquiao fight anybody after that. The gravy train will have come off the tracks, likely for good. Perhaps that’s why we kept hearing excuses from Arum about there needing to be an outside arena for a Mayweather-Pacquiao fight during the last failed negotiations. It just didn’t look as if Arum was interested in making the fight. Golden Boy Promotions CEO Richard Schaefer feels that the fight will get made, but only when Pacquiao is ready to retire and fight one more time.

Tyson Fury Ready for the Klitschko’s? Get Real! »