Brandon Rios: Abril is going to go down real hard 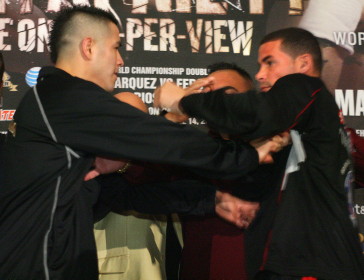 (Photo: Chris Farina – Top Rank) By Allan Fox: Undefeated former WBA World lightweight champion Brandon Rios (29-0-1, 22 KO’s) is predicting a knockout victory over his Cuban challenger Richard Abril (17-2-1, 8 KO’s) on Saturday night at the Mandalay Bay Casino and Resort in Las Vegas, Nevada. Rios and Abril have had a lot of angry words between them, and for Rios, this is personal. He wants to KO Abril to prove a point that he’s not in his league.

Rios said this about Abril during Monday’s press conference in Miami, Florida: “He’s going to go down and go down real hard.In the boxing world, Arbil is in the darkness and I plan to keep him there.”

Rios is referring to Abril not having a large fan base in the U.S. He’s from Cuba originally but now lives in Miami. However, Abril has failed to build a large fan base of yet. His losses to Breidis Prescott and Hank Lundy couldn’t have helped him any I imagine. Abril has lost each time he’s started to get his career in order. He’s now won his last five fights since the Lundy defeat, but it looks like Abril will be losing again on Saturday. Abril is ranked #1 by the WBA. That’s a good ranking to have, but if he can’t get past Rios, then it really won’t matter too much because he’ll be moved back down in ranking by the WBA after the loss.

Rios wants to get back at Abril for him having shoved him in his Miami press conference for his cancelled fight with Yuriorkis Gamboa. Abril shoved him to the face when the two were talking. It was an unexpected move by Abril, but he was clearly trying to rile Rios enough to get a fight with him. It worked, because he’s getting a fight. It does make sense given Abril’s No.1 ranking by the WBA, but it’s not the big fight that Rios was looking and hoping for. Abril is pretty much an invisible fighter in the U.S. He hopes to change that on Saturday night but it’s not likely.

« Sturm tries to hold onto WBA title against Zbik on Friday