Tyson Fury Ready for the Klitschko’s? Get Real! 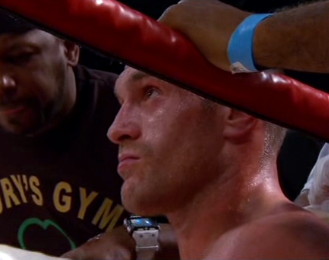 By Dallan O’ Donnell: According to reports, unbeaten British heavyweight Tyson Fury is now ready for the Klitschko’s and could potentially be fighting one of the brothers in early 2013. This has to be one of the most laughable headlines this year.

Fury is no better than a hyped up second tier fighter. Personally I believe if either Klitschko is up for the task then it wouldn’t last very long. David Haye fought Wladimir Klitschko and looked out of his depth, so imagine what the former WBA champ would do to Fury?

Surely we cannot believe that Fury could last long against Vitali or Wladimir and I believe most of the hype is coming because Fury dismantled a ‘has never been’, Martin Rogan. All of a sudden Fury is a world level fighter? It would be his biggest pay day ever. And if he took the fight now then you couldn’t blame him for not turning down the money, much like Dereck Chisora.

If Fury truly wants a shot at the Klitschko’s then he has to beat some “classy” opponents first. Take on some overweight former champion and surely Fury is then number one contender, wrong. First fight David Price after Price beats Sam Sexton. Price is a giant and is far more Skilful than Fury.

According to Fury’s promoter thought they did offer Price 100,000 pound to fight Fury but for one reason or another, fight wasn’t made. Price would, if they fought, expose Fury in a matter of a few rounds. So, bottom line, Fury is nowhere near ready for the Klitschko’s. I just hope another fighter beats Fury first so he cannot heap more shame on heavyweight boxing.

Finally! Sergio Martinez looks to have Chavez Jr. where he wants him »