Prediction: Hatton to get stopped by Brook 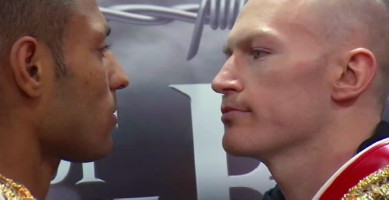 By Sean McDaniel: Matthew Hatton (42-5-2, 16 KO’s) will be giving it a shot moments from now to try and defeat unbeaten Kell Brook (26-0, 18 KO’s) at the Motorpoint Arena, Sheffield, Yorkshire, UK. Hatton has a ton of heart going for him in this fight but he’s short on the talent side of the equation. Heart is a good thing to have, but Hatton is so far out of his class in the physical side of the game that he’s going to have a lot of trouble in this fight.

You look at Hatton’s defeat last year to junior middleweight Saul Alvarez and you can see that Hatton is willing to take punishment in losing badly. However, the chances of Hatton surviving this fight is a much less because Brook doesn’t fight at as slow as pace as the 20-year-old Alvarez did last year. Alvarez probably could have stopped Hatton had he showed some fire and taken it out of 1st gear, but since Hatton wasn’t doing much other than just looking to survive, Alvarez stayed in a low gear rather than looking to put Hatton away.

Brook has more of a killer instinct and will want to do what he has to do to get Hatton out of there in order to impress boxing fans and to try and push his career forward. Brook probably has to get a stoppage over Hatton tonight in order to get anything out of this fight because he’s already expected to win easily. But if Hatton can survive 12 rounds it will be a minor victory for Hatton and a real negative for Brook. This is why I believe that Brook will get in Hatton’s face and look to take him out as fast as possible. Hatton is a good body puncher, but he’s going to be kept busy taking Brook’s incoming shots all night long. I expect the referee or Hatton’s corner to step in and halt the fight by the 8th round to save Hatton from taking any more punishment.