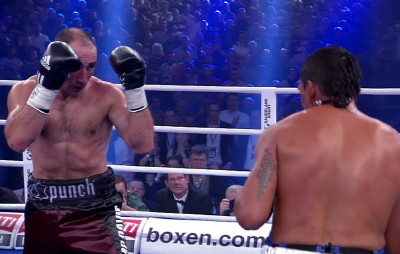 By Allan Fox: Former IBF middleweight champion Arthur Abraham (33-3, 27 KO’s) has been elevated to the #2 spot in the World Boxing Organization (WBO) rankings at super middleweight, and he hopes to get a title shot against the April 14th winner between WBO champ Robert Stieglitz and Mikkel Kessler.

It’s pretty much a given that the 31-year-old Abraham will be the lucky one to fight the winner of the Stieglitz-Kessler fight rather than someone like WBA/WBC super middleweight champion Andre Ward, Carl Froch, Andre Dirrell, or IBF champion Lucian Bute.

It didn’t take much for Abraham to get pushed up the rankings above the likes of the Dirrell brothers, Kelly Pavlik, James DeGale, George Groves and Adonis Stevenson. Abraham has lost three out of his last five fights, but after beating little known fighter Pablo Oscar Natalio Farias by a 5th round knockout last January, Abraham is now in a prime position to get a title shot provided that he doesn’t lose his next fight on March 31st against a still to be determined opponent.

Abraham won’t likely face anyone dangerous enough to hand him yet another loss, so there’s a good chance that he’ll be getting another title shot real soon. But what’s disappointing is how a fighter like Abraham, who has piled up three losses in the past two years, could be ranked at No.2 by the WBO. Besides it not making any sense whatsoever, it just seems wrong. Beating someone like Farias shouldn’t translate into Abraham being pushed to #2 by the WBO, especially with all those recent defeats.

I don’t care that Abraham lost those fights to good opposition in Andre Dirrell, Froch and Ward; he still lost those fights and should be ranked a lot lower than #2 because of it. That’s not right for the other contenders that the WBO has ranked, and not good for boxing because Abraham is such a limited fighter. He’s going to lose badly if Kessler is the one that emerges as the winner of the Kessler-Stieglitz fight, and ideally, Abraham needs to move back down to 160 because there isn’t a place for him at 168. His promoters likely are hoping that he can somehow get a win over Stieglitz or Kessler, and then go into a long title milking stage the same way that Stieglitz has been doing since he captured the WBO title in 2009.

It’s hard to believe that an average fighter like Stieglitz has been able to retain his title this long, but that’s obviously was only made possible with most of the best fighters in the division – Andre Dirrell, Froch, Kessler, Ward and Glen Johnson – being wrapped up in the Super Six tourney since 2009.

Abraham told boxen.com “That’s my goal [to fight the winner of the Kessler-Stieglitz fight]…If I win my next fight, then I will again grab the title.”

Paul McCloskey vs. Curtis Woodhouse a possibility for April in Belfast »