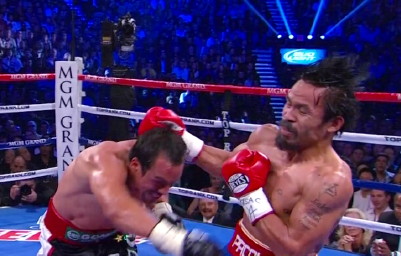 Arum was quoted in the Manila Bulletin saying that figures are still coming in, but the final PPV number will be around 1.4 million. Pacquiao’s previous high was last May when he drew 1.3 million PPV buys in his win over Shane Mosley. Manny also drew impressive numbers when he fought Oscar De La Hoya, Miguel Cotto and Antonio Margarito.

In the event the much ballyhooed fight between Manny Pacquiao and WBC welterweight champion Floyd Mayweather Jr. (42-0, 26 KO’s) comes to fruition it is a given that it was break all previous records for PPV fights.

In the event the Pacquiao – Mayweather fight does not happen Manny has a number of lucrative options. A 4th fight with Marquez is a possibility. Miguel Cotto also has become a viable prospect since his one sided victory over Antonio Margarito. “Pacman” is in the enviable position because of his huge drawing power of being the boxer everyone wants to fight.

Pacquiao will be in General Santos City this Saturday to celebrate his 33rd birthday. Manny has gone on record to say that he will hang up his gloves at the end of 2013 so that he can pursue his political career full time.

Bob Arum will be traveling to Manila in January to meet with Pacquiao to discuss his plans for 2012.

In addition boxing insiders such as famed trainer Emanuel Steward believe that Manny’s outside the ring activities have spread him too thin. The number of activities Pacquiao is involved in unrelated to boxing is ever increasing. There was also some question prior to the Marquez fight as to whether or not “Pacman” was peaking too soon.

« Haye: Andre Ward’s punches will have no effect on Carl Froch

Froch: I’m going to be trying to hit Ward in the face as hard as I can and as often as I can »