Froch: I’m going to be trying to hit Ward in the face as hard as I can and as often as I can 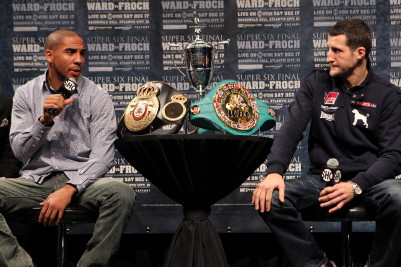 Froch had a sinister smile on his face for much of it and he looked as if he already was mentally celebrating his victory on Saturday over Ward. It’s too bad he actually has to fight Ward, because Froch might be better off living the fantasy that he’s the better fighter than going out and likely losing badly.

I’m frankly not all that surprised by that comment from Froch, because he really only has once chance of beating Ward and that’s to knock him out. Froch doesn’t have the jab or the boxing skills to win a decision against the American talent and really only has one avenue of winning.

It is what it is. Froch needs to intimidate Ward, which is what his comments are revealing about him. If he can scare and/or make Ward angry enough to slug with him, Froch has a sliver of a chance to win if he can connect with a big shot on the button.

Froch doesn’t have a good chance. Think of it as similar to trying to win a lottery, but he does have a chance. That’s Froch’s card and he’s playing it to the fullest.

His half-crazed looking smiles, his comments, and his staring at Ward all designed to throw him or set him off so that Froch can achieve his goal. He won’t succeed but it’ll be interesting to watch him try on Saturday. Half of the fun for me is to just watch the games Froch plays. The guy is like an actor.

The CSAC overturns Hopkins’ loss to Dawson, changes it to “no decision” »