Haye: Andre Ward’s punches will have no effect on Carl Froch 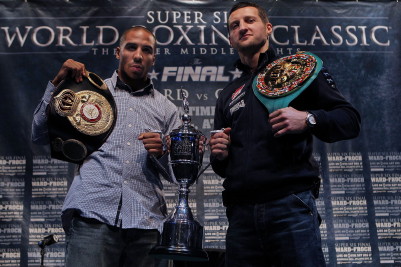 Haye told Sky Sports News “Ward isn’t going to be able to put a dent in him [Froch]. The guys [Ward] got a lot of skills, he’s got great ability, he’s an Olympic gold medalist, undefeated since 12 years of age but he’s never fought anyone like Carl Froch before.”

Sure he has. Ward fought Arthur Abraham and he’s pretty much a shorter version of Froch. They both share the same traits – painfully slow, wild homerun punches, poor defensive skills and a tendency to eat punches. I might also add both of them also can foul when things aren’t going their way, as we saw in Froch’s questionable win against Andre Dirrell, and Abraham’s fouling of Dirrell when he was getting dominated by the talent.

Haye continue with his vision “Carl won’t [surrender]. Carl will just keep grinding him down and grinding him down. He’ll put this guy in his uncomfort zone. Carl has boxed with champions.”

Oh brother. Haye sounds like he’s losing it. Froch is going to mentally crumble this Saturday night and effectively lay down on his hind quarters and show the submissive position to keep from getting whipped by Ward. I spotted some of this in their face to face meeting with Jim Grey where Ward was giving it to Froch verbally he looked like a kid who just had his crayons taken from him and was looking at Grey to see if he could get them back. Froch will submit to Ward’s will on Saturday. And as far as Froch’s chin goes, his chin is just as fragile as the next guys. Dirrell staggered Froch twice, and that was with Froch hanging all over him all night long. Jermain Taylor put Froch down, and Mikkel Kessler staggered him and had him running.

« Ricky Burns to fight on March 10th against TBA in Scotland