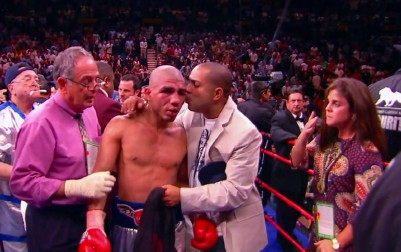 This is pretty special given that Cotto really hasn’t fought anyone of substance since his 12th round knockout loss to Pacquiao two years ago.

Cotto probably isn’t even the 7th best fighter in the 154 pound division right now, yet he’s the biggest money earner by far, eclipsing the best fighters in other divisions as well.

This is pretty significant and yet kind of sad at the same time. It’s a big deal because Cotto is still drawing big PPV numbers despite having been crushed by Margarito and Pacquiao not long ago.

It shows that boxing fans have a short memory or are forgiving of Cotto’s losses. But at the same time it’s kind of disappointing that Cotto is bringing in huge numbers when he would likely get beaten if he were to be matched against younger junior middleweights like Vanes Martirosyan, Austin Trout, Paul Williams, Erislandy Lara, Alfredo Angulo, Margarito, Saul Alvarez and against an older one in Sergiy Dzinziruk.

The weird thing about boxing is that sometimes by the time a fighter becomes a huge gate and PPV attraction, he’s often near the end of his career is no longer the best fighter even in his own weight class.

I see that as the case with Cotto. He’s going to do well with the matchmaking done for him by his promoter Bob Arum at Top Rank, but if he makes the mistake of putting Cotto in with someone from my list, I think he’ll lose badly. I think Julio Cesar Chavez Jr., the WBC middleweight champion, will beat Cotto if they get matched up next year.

« Marquez beats Pacquiao again, but fails to get the win – What else is new?

Calzaghe: I would have beaten Andre Ward »