Sergio Martinez: You have to know how to finish, not just how to start 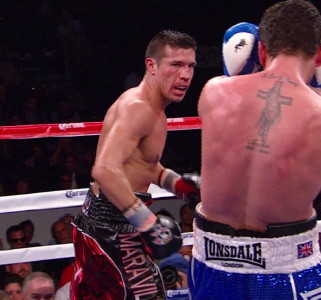 By Chris Williams: WBC Diamond middleweight champion Sergio Martinez has a lot of respect for Darren Barker for the effort he put in last Saturday night in fighting tooth and nail until eventually losing by an 11th round TKO.

Martinez noted how well Barker fought in the early rounds of the fight when Barker got off to a quick and impressive start. However, it was Martinez who did the finishing, coming on strong in the 2nd half of the fight to break Barker down with strong combinations from the 6th until knocking him out in the 11th.

Martinez said this to fightnews.com: “He [Barker] did a good job early on, but this is a 12 round fight. I know that around the 6th or 7th rounds, my work rate would increase and after he 8th or 9th, I would increase it even more. It’s good to have a good first or second round, but what’s important here is to know how to finish, not just how to start.”

Martinez is right of course. Barker may have not seen too many of Martinez’s fight against Kelly Pavlik where Martinez took it easy in the early rounds and then turned up the pace in the 2nd half of the fight to bust up Pavlik and win a decision.

Martinez planned on upping the pace even more if Barker hadn’t gone down in the 11th, and he figures he would have eventually gotten to him. As it was, Martinez would have won the fight by a 12 round decision anyway even if he didn’t get the knockout. Emanuel Steward, a trainer and HBO analyst, summed it up best by saying that Barker came to fight a good fight but not to win. He came to make it difficult for Martinez but he wasn’t ready to try hard enough to actually win the fight.

« Chisora-Olubamiwo: Dereck in what could be a tough fight for him on November 5th

Did Martinez purposely carry Barker for 10 rounds to look vulnerable to lure Mayweather or Pacquiao? »