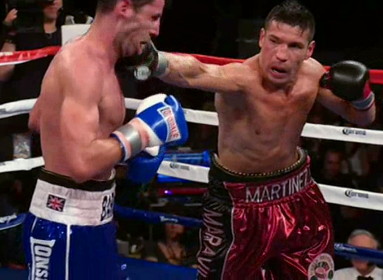 In a match shown on HBO Sergio won virtually every round, although he was not the formidable fighter fans had witnessed in his recent fights. At times Barker appeared to be competitive but he simply did not fire enough punches to stay in the fight. In addition Barker did not appear to mount the type of offense which would give the #3 Pound for Pound fighter in the world problems. In the initial stages of the fight however Darren’s style seemed to baffle Sergio, who took several rounds to get on track.

In short Martinez on Saturday night was not an elite fighter worthy of the #3 Pound for Pound ranking.

To be fair to Martinez, fighters do have an occasional off night. The problem Sergio has is that he wanted to use the HBO televised match with Barker to showcase his talents. Martinez desperately wants to land a big money fight with the likes of Manny Pacquiao or Floyd Mayweather Jr. Sergio has been beating the drums of late for a match against either of the superstars of boxing. World Boxing Organization (WBO) welterweight champion Manny Pacquiao (53-3-2, 38 KO’s) in particular has been targeted by Martinez for a possible future fight.

The stumbling block for Sergio in landing such a fight is the huge size disparity between the 5’6 ½”, 145 pound Pacquiao and Sergio’s 5’11”, 157 pounds. After the weigh in for a Pacquiao fight it is presumed that Martinez would rehydrate up to 165 pounds or better, while Manny would remain in the mid 140’s. The Pacquiao camp does not like that scenario.

Sergio is in the unenviable position of having to either move up or down to land a big money fight. There is no fighter in the middleweight ranks who would bring in the type of revenue the 36 year old Martinez is looking for.

Manny started his career fighting in the neighborhood of 105 pounds and over the past fifteen years has risen to 145 pounds. Even though he destroyed the much larger Antonio Margarito in November 2010, Pacquiao conceded afterwards that he was hurt by some of Antonio’s punches. Margarito had rehydrated after the weigh in for the Pacquiao fight to a 17 pound weight advantage at ring time. Pacquaio and trainer Freddie Roach said that they would not make that mistake again.

Sergio is so desperate to land a big money fight with Pacquiao that he said last week he would come down to 150 pounds.

Khan: I hope Casamayor does me a favor and knocks Bradley out »