Did Barker quit against Martinez? 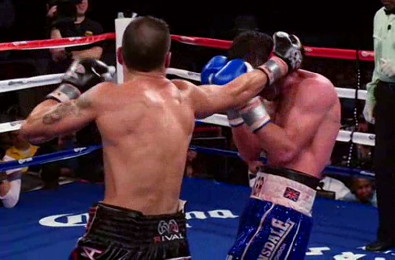 By Scott Gilfoid: In taking a close look at last night’s fight between WBC Diamond middleweight champion Sergio Martinez (48-2-2, 28 KO’s) and his British challenger Darren Barker (23-1, 14 KO’s), I really wasn’t too impressed with the finishing right hand that Martinez landed in the 11th to put Barker down face first on the canvas for the count. It looked like a quit job to me.

It really didn’t look like he even hit him solidly. It seemed more like a cuff or a push, causing Barker to just fall down and then not get back up. I could understand him being knocked down from the cuffing action of the shot, but when Barker attempted to get up, he collapsed back in the canvas.

It didn’t look genuine to me. I thought it was a bit of an acting job. Who knows? Perhaps Barker was hurt by the shot, but it didn’t look like a big punch at all to me, and the way that he fell down seemed like he was put down from a pushing action more than from being hurt. But either way, it really doesn’t matter. Barker seemed to stop really trying to win the fight by the 8th. He was a different fighter from that point on. And in the 10th, Martinez badly hurt Barker with a scorching right hand that caused Barker to stagger and hold on for dear life. Barker was forced to cover up while Martinez unloaded on his with a barrage of punches. Barker was hardly throwing anything back at all for the remainder of the round and I thought the referee needed to stop the slaughter.

Barker had taken a terrible beating in the fight and was really getting pasted in the 8th through 11th rounds from hard shots from Martinez. It was pointless for Barker to continue fighting because he wasn’t competitive and was just soaking up punishment, so if he did do a quit job, it’s all good. I don’t blame him if that’s what he did. I would have liked to have seen his corner step in and halt the fight around the 9th, when it was clear Barker had no chance against Martinez. Instead, he kept coming out and taking punishment without anything to offer other than a weak jab every now and then and a rare right hand.

I only gave Barker one round, the 4th. Barker simply didn’t throw enough shots in the rounds and was just jabbing and getting hit by Martinez’s jabs, right hooks and straight left hands. There was nothing competitive about the fight because Barker really didn’t go after Martinez with a concerted effort. He gave him too much respect, as if Barker was afraid of getting hit with something big at any moment. It seemed like such a waste for Barker.

I mean to travel all the way from Britain and do little more than jab and throw a token right hand every now and then. Martinez may not have shined in the fight, but that was mostly because Barker was fighting so defensively. There was nothing for Martinez, a counter puncher, to react on, because Barker was fighting on his back foot just jabbing for the most part. What a waste. Barker needed to go out and make a fight of it instead of fighting so defensively. It looked like Barker just wanted to survive, and that he did until the 11th. He would have been much better off to have emptied his offensive tool kit in the first few rounds to try and get a knockout so that he could go back home to the UK with his head held high.

« Sergio Martinez not interested in facing Bernard Hopkins next

Barker suffers perforated eardrum in loss: What next for him? »