Barker suffers perforated eardrum in loss: What next for him? 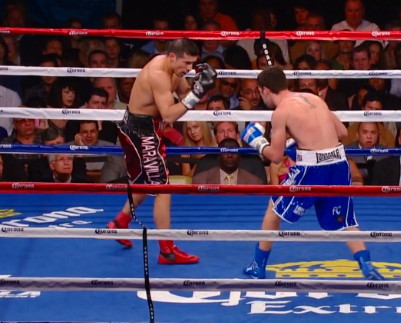 By Allan Fox: Darren Barker (23-1, 14 KO’s) gave it his best shot last night against WBC Diamond middleweight champion Sergio Martinez (48-2-2, 28 KO’s) but in the end Barker didn’t have the power, the workrate or the defense to win the fight and was taken out by a rather soft-looking right hand to the left side of his head in the 11th that put Barker down on all fours on the canvas.

Although Barker gamely tried to get up, he was too hurt from the shot to make it back to his feet and was counted out by referee Eddie Cotton at 1:29 of the 11th. After the fight, it’s been learned that Barker suffered a perforated left eardrum, no doubt from the right hand that Martinez landed in dropping Barker in the 11th. The thing is the right hand actually appeared to hit Barker’s left glove and that’s what connected to Barker’s left ear.

It must have been painful for Barker, because even after he was taken back to his corner he kept grimacing in pain for well over a minute, as if he couldn’t shake the pain. His left eye was badly swollen and he looked pretty much like a mess. Things hadn’t gone well for him in the fight. Other than slowing the fight down by boxing on the outside and taking few chances by mainly throwing jabs, Barker really didn’t make it much of a fight.

Martinez was winning rounds with little effort. He wasn’t letting loose on Barker, and seemed like he was carrying him at times to get him into the later rounds. The judges had the fight scored as such at the time of the stoppage: 96-94, 97-94 and 99-91. I saw the 99-91 as being the true score for the fight, because Barker wasn’t throwing enough punches and was just jabbing. It wasn’t nearly enough to win rounds when Martinez was hitting him with straight lefts all night long.

What’s next for Barker? I’m sure Barker can get some interesting fights against the likes of Nobuhiro Ishida, Sebastian Zbik, Grzegorz Proksa, Fernando Guerrero or Andy Lee after tonight. Barker is now a known fighter because of this loss, and I think it would be great if he can get a fight against one of those guys. I don’t think Barker can beat Zbik, Proksa or Lee, because those fighters have much better offensive weapons compared to Barker.

But Barker can maybe slow the fight down enough to where he can possibly win a decision if stays on the outside and doesn’t try to mix it up. Barker doesn’t have the power or the ability to throw combinations to beat those guys, but I think he can make it a much harder fight if he focuses on boxing without mixing it up. Barker is too limited in terms of offensive skills to compete with those guys in a war. He has to turn it into a pure boxing match for him to maybe get lucky and have the judges ignore the cleaner landing shots from one of those fighters.

Other than that, it would be a real pity to see Barker go back to fighting 2nd tier Euro level opposition like he’s been fighting his entire career. At 29, Barker is too old to be wasting time fighting at that level anymore unless that’s what he wants for the remainder of his career.

« Did Barker quit against Martinez?