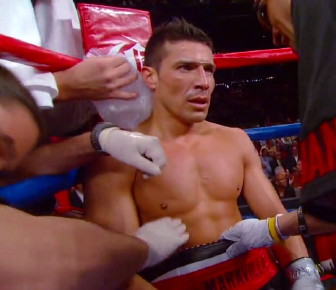 This is a fight that will keep Martinez active while he waits for a possible fight against either Chavez Jr or No.1 ranked WBC contender Marco Antonio Rubio. The goal is to fight Chavez Jr, take back the title that was stripped from him by the WBC, and then hunt down one of the big names like Manny Pacquiao, WBC junior middleweight champion Saul Alvarez, Andre Ward or Carl Froch. Martinez is open to fighting pretty much anyone from the welterweight to the super middleweight divisions as long as their a popular fighter and not someone just trying to use his name to become popular.

Barker is a good domestic and European level fighter, to be sure, but the WBC has done him no favors in giving him an inflated #3 ranking without the experience to deserve such a high position. That’s being put in a high level math class without the mastery of the lower fundamental courses. Barker simply isn’t ready and I don’t think he’s going do well in this fight. To be fair, it probably doesn’t matter how much much experience Barker has for this fight, because he’s going to be out of his depths no matter what.

If he did have the experience, he likely wouldn’t have gotten the fight because he would have probably been beat five or six times in getting that experience against higher level fighters. But what I see here is a lack of hand speed, power and athletic skills for Barker. He’s too rigid, too mechanical, like a robot and too weak to compete with Martinez. This is actually a step down for Martinez from his last fight against Sergiy Dzinziruk, who Martinez destroyed in the 8th round last March.

Helenius vs. Liakhovich will be a war while it lasts »