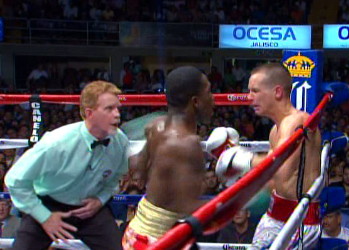 By Scott Gilfoid: Golden Boy Promotions CEO Richard Schaefer is in London to meet with promoter Frank Warren to try and set up a fight between World Boxing Organization (WBO) super featherweight champion Ricky Burns (32-2, 9 KO’s) and his No.1 challenger Adrien Broner (21-0, 17 KO’s) for a fight that will – if it’s made – take place in Autumn. It’s what you would call a huge step up fight for the 28-year-old Burns, because he’s been in easy fights since capturing the WBO strap last year against Roman Martinez.

On paper, this is a huge mismatch because the 22-year-old Broner is simply too talented for Burns to compete with. However, Burns has a lot of heart and he could make it a more competitive fight if he’s able to make it out of the 1st round. That’s a big question mark because we just saw Broner destroy one of the best fighters in the super featherweight division in a 1st round knockout last June when Broner dismantled Jason Litzau in the 1st round.

I would favor Litzau over Burns if they were to fight. That’s how good Broner is. He’s like the super featherweight division’s version of Floyd Mayweather Jr. This guy is an amazing talent and someone that is going to be dominating at this weight and other weight classes years to come. Unless Broner gets too carried away with his fame and fortune, I can see him moving up weight class after weight class and winning titles as he goes. He’s that good. Broner defeated Daniel Ponce De Leon in March of this year, using speed and movement to reduce the hard hitting Ponce De Leon to a punching bag in the process of beating him.

« Kevin Mitchell wants to avenge his loss to Michael Katsidis