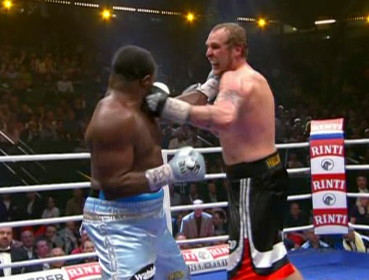 By John F. McKenna (McJack): Sergei Liakhovich (25-3, 16 KO’s) will be facing one of the rising stars in the heavyweight division when he faces Robert Helenius (15-0, 10 KO’s) on August 27. The fight should be an interesting matchup and something of a test for the towering 6’7” Helenius.

Sergei has taken a new lease on life and is looking to return to the prominence he once held in the heavyweight division and is convinced that he can defeat the untested “Nordic Nightmare” as the 27 year old Helenius is known to his fans.

Helenius likes to keep his opponents at bay by using his reach and by making maximum use of his long left jab. He used his jab effectively in his fight with Sam Peter this past April. Helenius, who looks better each time out, also has a potent and powerful left hook.

The 35 year old Liakhovich is attempting to get his career back on track after losing his WBO Heavyweight title to Shannon Briggs in 2006. Sergei is only too well aware that he needs to get past Helenius’ left jab to get inside and bang away at Robert’s body. The “White Wolf” as Liakhovich is known has a good body attack, in particular his punishing left hook.

LIakhovich is excited about his return to the ring after a long period of inactivity. Sergei injured his shoulder prior to his decision loss to Nikolai Valuev in 2008. After the Valuev fight Liakhovich took a long time off to allow the shoulder to heal. He made a decision to let the shoulder heal on its own rather than have surgery. It is a decision that Sergei is happy with.

Sergei is genuinely convinced that his edge in experience will carry the day and that he will be able to nullify the reach advantage of his opponent. Liakhovich holds victories over Lamon Brewster, Friday Ahunanya and Dominic Guin. Sergei feels that he is a more mature and patient fighter than in the past and is hopeful that a victory over Robert Helenius will propel him back into the heavyweight mix.

Both Robert Helenius and Sergei Liakhovich are looking forward to their August 27 bout with great anticipation and look at it as a defining moment in their career.

Adamek vs. Klitschko: Tomasz has to fight like a wild animal to win »