Adamek vs. Klitschko: Tomasz has to fight like a wild animal to win 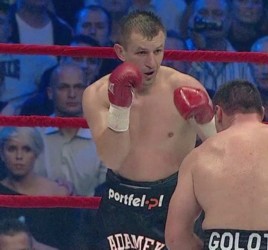 By Dan Ambrose: The September 10th fight between WBC heavyweight champion Vitali Klitschko and challenger Tomasz Adamek looks to be one of the worst mismatches in recent years. Adamek is seriously too small and slow to be any kind of threat to Vitali. To be sure, I’ve seen Vitali steam roll over other overmatched opponents like Alberto Sosnowski, Kevin Johnson, Chris Arreola, Shannon Briggs, Odlanier Solis and Juan Carlos Gomez during the last two years, but those guys could at least punch at little.

That made them a partial threat to beating Vitali. Adamek doesn’t have any power at heavyweight and his handspeed is badly lacking. In my view, Adamek has only one small chance of winning and that’s if he goes out and fights like a wild animal from the opening round. Adamek literally has to come out clawing and ripping at Vitali and try to wear him down with a frantic pace.

The Polish heavyweight has to pull out every trick in the book and go a little nutso if he wants to get Vitali off his game enough to possibly win. The fight takes place in Poland, so Adamek at least has that going for him. The crowd will be cheering for every punch he throws and the judges might score rounds for him if he can just throw shots in Vitali’s direction and hope for the best. That’s really the only way the slow-footed, slow-handed Adamek can win this fight. He can’t fight the way he usually does with his hit and run type of fight and hope to win. Adamek fights a lot like Chris Byrd, and that kind of style won’t get the job done against Vitali, not anymore.

If I’m Adamek, I’d attack Vitali like a bear attacking a small deer. I would be on him with the claws and just tearing into him. You got to be fierce to beat Vitali, and I just don’t think a hit and run artist like Adamek will be able to win any rounds whatsoever fighting as usually does.

Pacquiao vs. Marquez: Manny will have problems if he can’t move like he used to »