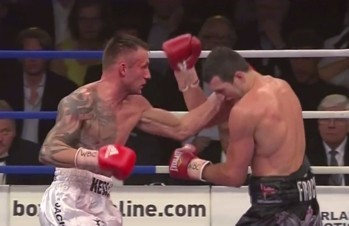 By Eric Thomas: According to reports, Mikkel Kessler didn’t received an offer of $3.5 million to fight IBF super middleweight champion Lucian Bute. Kelly Pavlik was angered recently at hearing a rumor about Kessler receiving a bigger offer for the Bute fight than Pavlik’s $1.35 million offer, which Pavlik felt wasn’t enough if Kessler was getting a bigger offer.

However, according to boxing news, Kessler only received an offer of $750,000 for the Bute fight, along with his Danish television money which would have likely bumped it up close to what Pavlik was going to get. If all this turns out to be true, then Pavlik blew it by walking away from the Bute fight. But then again, Pavlik may not have blown it because it wasn’t a good fight for Pavlik anyway.

He could be better off walking away from this fight because of the style match-up. The talk of Pavlik wanting to fight Carl Froch, the WBC super middleweight champion, and Brian Magee, would seem like better options for Pavlik than a fight against someone like Bute.

Pavlik will obviously take a lot of heat for this but you can’t blame him for being upset because no one wants to fight someone when they feel like they’re getting 1/3 of what was offered to someone else. It’s unclear whether it’s too late to repair the damage for the Bute fight to get made, but like I said, Pavlik might be better off skipping that fight and going with one against Froch. That’s a bout that would likely bring in more fan interest anyway because Froch is arguably more popular in the U.S. than Bute and has a more exciting fighting style.

« Matthysse-Morales: Lucas may need a knockout to win