Ortiz is too green to beat Mayweather 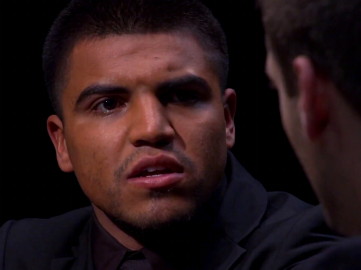 By Chris Williams: It’s too bad that WBC welterweight champion Victor Ortiz (29-2-2, 22 KO’s) is being rushed into a fight against Floyd Mayweather Jr (41-0, 25 KO’s) on September 17th, because if Ortiz were given more time to develop as a fighter he could really be something in the sport. But throwing him in with a skilled technical like Mayweather is going to be like throwing a hunk of meat to a hungry lion.

Ortiz is going to get eaten up and spit out by Mayweather in this fight. Ortiz is way too green to be facing a guy like Mayweather at this point in his career. Ortiz barely beat Andre Berto in his last fight, and in his fight before that, he was held to a draw against Lamont Peterson. Mayweather would absolutely destroy both of those guys on the same night. I see Ortiz as still being pretty much the same fighter that couldn’t beat Peterson. Ortiz doesn’t fight well against boxers and is easy to be thrown off his game.

I think Ortiz is the type of fighter that would do really well against a puncher like Manny Pacquiao, but not at all well against a world class boxer like Mayweather. It’s all about styles and Mayweather has a style that Ortiz simply can’t beat. He doesn’t have the maturity to beat him or the skills.

« Alvarez vs. Gomez: Alfonso should make it interesting for a few rounds