Will Dzinziruk be ruined by the loss to Martinez? 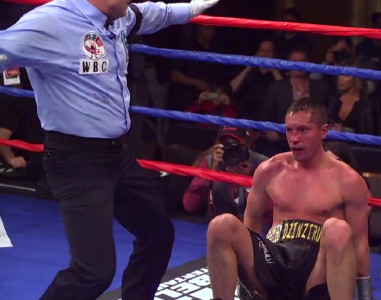 Dzinziruk was knocked down five times in the fight and took a lot of hard left hands to the head from Martinez, as well as a lot of jabs. The way that Dzinziruk was beat you have to wonder whether he’ll suffer permanent damage whether to his self-confidence or physically. He was totally dominated by Martinez in the fight and never really stood a chance for a second.

Dzinziruk might have been able to help himself had he started off quicker in the fight, because while he was getting hit with repeated jabs one after another in the first three rounds, Dzinziruk would only jab back reluctantly. It was like he was holding back for some reason. Dzinziruk eventually started letting his jabs go with a lot more regularity starting in the 6th, but even then he still wasn’t matching Martinez’s workrate.

Dzinziruk will now be moving back down to the junior middleweight division where he’ll resume defending his WBO title. That sounds good, because he’s clearly not a middleweight as we saw in the Martinez fight. However, Dzinziruk may have problems in the near future because the #1 contender is Vanes Martirosyan, a fighter with excellent power, a great jab and a fighting style that could give Dzinziruk a lot of headaches.

Besides Martirosyan, there’s also Alfredo Angulo, someone with a lot of power and quite capable of knocking Dzinziruk out. I think Dzinziruk would have a lot of problems against either of those two fighters.

Dzinziruk took some really hard head shots from Martinez and you have to worry that he might not be the same fighter after this bout.

Cotto might have lost to Mayorga if not for Steward »