Peter vs. Helenius: Will Samuel get stopped again? 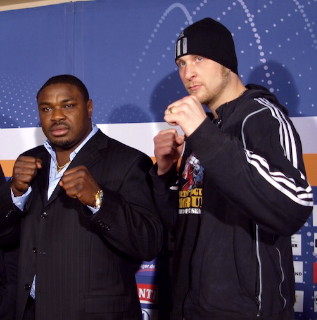 Peter, 30, has a lot more experience than the 27-year-old Helenius. However, Peter didn’t look very good in the recent press conference with the towering Helenius. Indeed, Peter looked beaten already and didn’t have the same glow about him as he did before fights against James Toney and Oleg Maskaev.

This is a winnable fight for Peter, but he’s got to really take it to Helenius or else he’s going to get knocked out again. Helenius is very predictable in what he does in the ring. He fights a lot like Wladimir Klitschko with the way that he jabs and retreats at the first sign of aggression from his opponents. But what makes Helenius really predictable is his punch selection.

If you watch his fights, Helenius shows a tendency to jab a couple of times and then come in with a right to the midsection. He does this over and over again in all his fights. All Peter has to do is wait on Helenius to bend over and try to throw one of his body shots.

If Peter can tag Helenius at that moment the fight will be over. Other than that, Peter needs to get Helenius backing up to get him up against the ropes. Helenius will literally back up all over the ring while throwing jabs in retreat. But he doesn’t have the same kind of punching power as Wladimir and Vitali Klitschko. He can punch hard but he’s not in the same class as the Klitschkos.

Peter needs to go after him and look to take Helenius’s head off once he gets him up against the ropes. If he doesn’t force the fight, he’s going to get pounded out and cut up. This is a make or break fight for Peter. He can’t afford to lose this fight and given that it’s taking place in Germany, Peter needs to make sure he knocks Helenius out if he doesn’t want to risk losing by a decision.

« Kessler could be back in action on June 4th against St. Juste

Haye out of his depth against Wladimir »