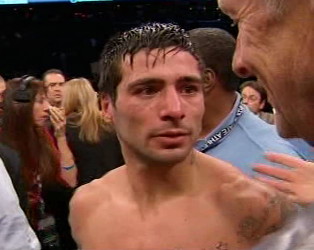 Judah, 33, was lucky the fight only had 12 rounds, because he was taking a real pounding from the 28-year-old Matthysse, especially in the last three rounds of the fight. Judah was dropped in the 10th by a hard right hand from Matthysse, and then needed to run for the remainder of the rounds to keep from getting knocked out.

However, Judah did enough during the first half of the fight to get a narrow decision. Matthysse made the mistake of not doing enough in the first six rounds and basically gave most of the rounds to Judah for failure to show any real aggression.

It was the wrong strategy to use against a fighter like Judah, who is more known for his problems taking hard shots to the head than he is to taking body blows.

Obviously, Matthysse was hoping to weaken Judah by throwing to the body but he spent far too much time focusing on this strategy and it ended up costing him the fight.

By the time that Matthysse shifted his attention to throwing to the head in the 2nd half of the bout, he was badly behind and needed multiple knockdowns and/or a knockout to win. Matthysse was able to score a knockdown in the 10th, but was unable to finish Judah off.

Judah had this to say after the fight according to ESPN: “I didn’t take any shortcuts in training and I knew that was what was going to pay off. The mother***** was a strong fighter. He was every bit of 160. He was really strong, but I kept my jab and that’s what worked for me in the end. I’m never ever going down ever.”

I think Judah is really kidding himself here. I see him as a washed up fighter at light welterweight and welterweight. He doesn’t have what it takes to beat the best fighters in the division, and arguably should have lost this fight. He certainly didn’t finish strong with the battering he was taking and all the running he was doing.

This fight pretty much showed that Judah has little chance against the top fighters in the light welterweight division. Matthysse, although a good fighter, isn’t as big of a puncher as Marcos Maidana or Victor Ortiz, and he’s not nearly as skilled as Timothy Bradley, Amir Khan and Devon Alexander. Those guys would be a huge obstacle for Judah and it’s doubtful that Judah could beat any of them, except for possibly Khan if he comes aggressive and lands something big early on Khan’s weak chin.

There’s talk of Judah either fighting the winner of the Ortiz vs. Lamont Peterson fight or top light welterweight contender Kaiser Mabuza. Judah might have a chance against Mabuza, but Ortiz would likely make quick work of Judah and have him tasting defeat. Judah’s time at the top appears to be over.

Judah might be able to make some noise if he could move down to lightweight and compete against guys like Juan Manuel Marquez, Michael Katsidis and Humberto Soto, but at light welterweight, he’s lacking the chin, the stamina and the aggression to beat the top guys.