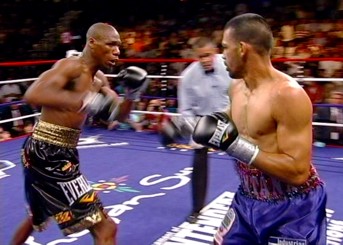 By Dan Ambrose: Former two-time World Boxing Organization welterweight champion Paul Williams (39-1, 27 KO’s) says he’s going to give WBC middleweight champion Sergio Martinez (44-2-2, 24 KO’s) a beating on November 20th in their rematch at a 158 pound catchweight at the Boardwalk Hall, in Atlantic City, New Jersey. Martinez and Williams fought last year in December in a fight in which both fighters shared first round knockdowns. Williams eventually won the fight by a 12 round majority decision as he was able to impress two of the judges with his superior work rate. The outcome was far from conclusive, however, as Martinez made Williams look silly for most of the fight with his slick boxing skills and his better power.

In the end, two of the judges gave Williams the decision based on liking his work rate and not minding that he was getting tagged hard in every round by Martinez. In a telephone conference call today, Williams said “We’ll put a real beating on him this time, if the knockout comes, it comes. I’m going to put that beating on him this time, you know. It’d be much brutal this time.” For Williams, who’s ranked #2 WBC in the middleweight division, to make it brutal like he’s talking about, he’s going to have to have a lot of help by Martinez.

Williams is a plodder and doesn’t move well around the ring. He can’t pursue quickly and doesn’t adjust to lateral movement with any kind of speed. Martinez, however, is fast on his feet and good at moving and jabbing and landing his pot shots. He’s not likely going to be standing there making it easy for Williams on November 20th.

That’s how Martinez ended up giving up rounds to Williams in their fight last year in December. Martinez did well when he was landing pot shots and using lateral moment. His problems resuled when he would make the mistake of standing and trading with Williams. That’s where Martinez took punishment. If he’s smart, he’ll avoid that trap and will stay on the move.

This bout will be fought at a 158 pound catchweight to accommodate Williams, who plans on moving back down to welterweight in hopes of fighting Manny Pacquiao next year. There is a possibility that Williams could wind up getting a fight with Pacquiao, but for that to happen, Williams will have to look really vulnerable in the process of beating Martinez. Pacquiao would be giving up seven inches in height and about a foot in reach to the 6’1″ Williams, and that might keep Pacquiao’s promoter Bob Arum from making that fight.

« Khan sees himself as the first person to knock Maidana out; says he wants Mayweather by the end of next year

Roach thinks Margarito is too flawed to beat Pacquiao »