WBA will not reinstate Manny Pacquiao as 147-lb Super Champion

By Sean Jones: Manny Pacquiao will not be reinstated by the WBA as their 147-lb ‘Super Champion,’ according to the president of that organization Gilberto Mendoza.

Pacquiao (62-7-2, 39 KOs0 lost his WBA title when he failed to defend it for two years after winning it in July 2019 with a victory over Keith Thurman.

Pacquiao likely won’t lose any sleep about not being given back his WBA strap. His payday for his fight next month against Spence Jr will be just as good without the WBA title.

As a result, Pacquiao will be the challenger when he faces IBF/WBC welterweight champion pence Jr on August 21st at the T-Mobile Arena in Las Vegas, Nevada.

Instead of the fight being a unification, as Spence would have liked, he’ll be making a title defense against Pacquiao.

Mendoza states that the World Boxing Association’s regulations don’t allow them to strip the current WBA 147-lb champion Yordenis Ugas of his title to reinstate the 42-year-old Pacquiao, who is currently the ‘Champion in Recess.

“No, it will not happen [for Pacquiao to be reinstated to WBA Super Champion), according to the regulations, it cannot happen,” said WBA president Gilberto Mendoza to ESPN KNOCKOUT.

“We cannot get him [Pacquiao] out of the recess he had because Ugás is already present there, and you cannot take away the rights that we gave to Ugás at any given moment.”

“Unfortunately, he is not going to be unifying as we would like. It would have to be that the winner of that fight goes with Ugás,” said Mendoza.

It’s hard to justify Pacquiao being reinstated as the WBA 147-lb champion, given that he hasn’t fought in two years. How do you give him his title back when he’s done nothing to defend it in the last 24 months?

There would have been many angry boxing fans if the WBA had stripped Ugas of his title after elevating him to the spot. Ugas has been as happy as a lark since being given the WBA strap.

Unfortunately, Ugas hasn’t capitalized on his position as the WBA champ to get a lucrative fight against Spence, Keith Thurman. Pacquiao or Terence Crawford.

Ugas hasn’t been all that active either, having last fought ten months ago, but at least he hasn’t been sitting on the shelf for as long as Pacquiao.

Ugas to defend against Andre Berto

The strange part is that Ugas (26-4, 12 KOs) will be making his first defense of his WBA 147lb title against Andre Berto next. Berto, 37, hasn’t fought in three years since 2018 when he beat a shot, Devon Alexander, by a 12 round split decision.

Nevertheless, the WBA has Berto ranked at #10 with their organization despite his inactivity, and Ugas, for some reason, will be defending against him rather than a relevant younger fighter.

It’s both shocking and perplexing that Ugas would choose to make his first defense of his WBA title against Berto rather than a more deserving active contender.

Why isn’t Ugas defending against Keith Thurman? ‘One Time’ has been calling Ugas out, making it known that he wants to fight him next. Why would Ugas face the 37-year-old Berto, who has looked like the shell of his former self since 2011.

If Berto had beaten someone recently to earn a world title shot, you could understand Ugas fighting him, but that’s not the case.

Berto hasn’t fought in three years since 2018, and he’s lost two out of his last four fights since 2015.

As such, Berto’s record in his last four fights is 2-2, and he’s being given a world title shot. It’s sad and slightly pathetic, particularly for the boxing public because Ugas vs. Berto will likely be a headliner on Showtime. 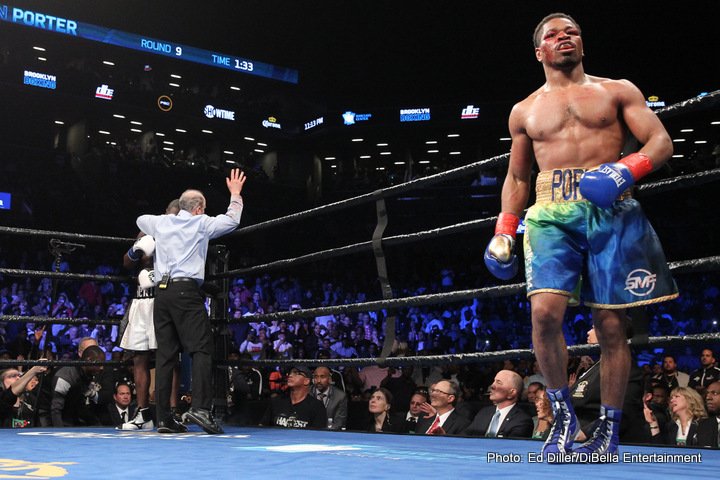 For those who don’t remember Berto (32-5, 24 KOs), he’s a former IBF/WBC welterweight champion who was one of the best fighters in the 147-[lb division a decade ago.

However, Berto’s once-promising career floundered in 2011 when he lost to Victor Ortiz by a 12 round decision. Bero would later lose to Robert Guerrero, Jesus Soto Karass, Floyd Mayweather Jr, and Shawn Porter.

When Mayweather gave Berto an underserved fight in 2015, he was already viewed as a shot fighter in the eyes of boxing fans. Berto’s ninth round knockout loss to Shawn Porter in 2017 confirmed that he’s over-the-hill.