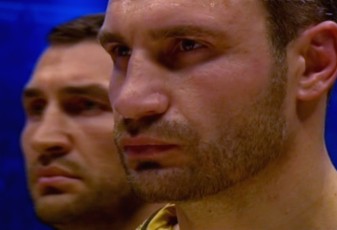 By Jim Dower: WBC heavyweight champion Vitali Klitschko (40-2, 38 KO’s) has apparently lowered his offer to former World Boxing Association heavyweight champion Nikolay Valuev (50-2, 34 KO’s) even further to $1.2 million, according to German news publication the Bild. Vitali, 38, was previously offering the 36-year-old Valuev $2.5 million to fight him months ago. However, Valuev’s promoter Don King wanted to get $4 million for Valuev. Klitschko showed no interest in paying that. The next offer from Klitschko was $1.5 million. However, Valuev and his promoter haven’t gone for that deal either. Now it looks like Klitschko may have dropped it even further to $1.2 million.

Klitschko said “I have said to Nikolay. I’m offering him $1.5 million. Now it’s around $1.2 million. He can accept that or not. He is not a mandatory challenger. So if not, they might have to wait for eternity for a world title shot against me.” Valuev appears to have few options right now. He chose not to fight a rematch with WBA heavyweight champion David Haye, but it’s hard not to blame Valuev for passing that up. He would have made much less money and probably would have lost again.

Valuev would be at great risk if he was to stay busy against one of the top heavyweight contenders because Valuev hasn’t looked good for a couple of years since beating Sergey Liakhovich by a 12 round decision in February 2008. Valuev could wait around and focus on beating 2nd tier heavyweights until he becomes Vitali’s mandatory challenger, but Valuev may not get any more money than he is now.

Vitali has been without a big named opponent to fight since making a comeback in 2008 and beating then WBC heavyweight champion Samuel Peter. Since then, Vitali has successfully defended his WBC title against Juan Carlos Gomez, Chris Arreola, Kevin Johnson and most recently Alberto Sosnowski. None of those opponents have given Vitali the huge payday that he craves. Vitali would like to fight WBA heavyweight champion David Haye, but he’s not interested in fighting Vitali at this time. Haye is busy looking at fighting Audley Harrison.

The next best fight for Vitali would be Valuev. However, Valuev wants to be well paid for a fight against Vitali, and that’s where the two have had problems. The fight would do well, but Vitali is reluctant to give Valuev the big money that he’s asking right now.

If Vitali doesn’t fight Valuev, then his options aren’t looking all that good either. Vitali could Odlanier Solis, his number #1 challenger. However, that’s a fight that won’t be a big money fight for Vitali. He might be better off giving Valuev the money that he wants and taking that fight before fighting Solis.