Valuev-Klitschko: Should Vitali give Nikolay 40% of the revenue? 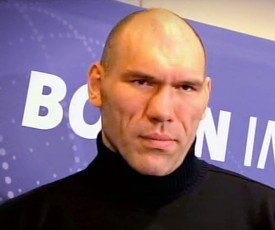 By Erik Schmidt: The proposed fight between World Boxing Council heavyweight champion Vitali Klitschko and two-time WBA heavyweight champ Nikolay Valuev has reached an impasse in the negotiations over the money for the fight. Klitschko and his team have offered Valuev an initial $1 million for the fight and then come up to $2 million after the first offer was rejected by Valuev’s promotional team. Valuev’s co-promoter Don King is asking for a 60-40 revenue split in Klitschko’s favor, which could amount to $4 million for Valuev if the fight makes $10 million like King thinks it will.

Right now, there are few appealing alternatives for Vitali to fight other than Valuev if he wants to get a good payday. The popular British heavyweight David Haye, who holds the WBA heavyweight strap, is currently tied up with a scheduled fight against two-time former heavyweight champion John Ruiz on April 3rd and isn’t available for a fight anytime soon. And the top contenders in the WBC aren’t well known or popular fighters. If Klitschko does decide to walk away from the Valuev fight, here is what he would be looking at in terms of opponents:

As you can see, there are few appealing opponents for Klitschko to fight. James Toney (70-6-3, 44 KO’s) would have been a potentially interesting opponent for Klitschko four years ago, but not now. Toney has lost two out of his last six fights and is looking fat and old. Toney’s recent wins have come against Danny Batchelder, Fres Oquendo and Matthew Greer. And Toney looked to have received a gift decision in the case of the Oquendo fight.

The other names in the top 15 probably aren’t really big enough stars for Vitali to make the kind of money that he would be making in the Valuev, even if he does accept the 60-40 percentage split that King wants for his fighter. In this case, Klitschko needs to maybe look at the big picture and take the 60-40 deal so that he can make more money and not waste time fighting someone that fans could care less about seeing.

Valuev may not be the fighter he once was at one time, but he’s still a relatively popular heavyweight, at least in Europe. The heavyweight contenders in the WBC are too green or too limited to be much of a money maker for Klitschko. Vitali might be better off giving in and letting Valuev have the cut of the revenue that his team are asking for. Klitschko doesn’t have a lot more time in his career to make up the money he will lose if this fight goes down the drain.

« Is Mayweather a wimp for asking Pacquiao to take blood tests?