David Haye Vs Nikolay Valuev – The Fight That Made Fights 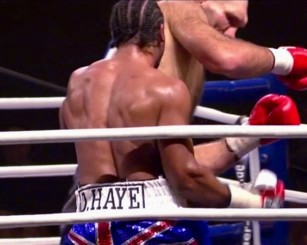 By Adam Fillingham: David Haye the new WBA world heavyweight champion defeated 7ft Nikolay Valuev on Saturday to make world history in beating the tallest ever world champion, by a majority decision. What I could not understand though is how the first judge, Juan Manuel Garcia Reyes could have scored the fight 114-114.

Now I will admit that my score card seems a little lenient towards Haye but I do honestly think he won by a wide 119-112. My friend who also watched the fight had it at a slightly less wide 116-113 and the commentators on radio 5 live had it scored at 116-112, agreeing with the other two judges.

Haye though had it all for me. His body movement, especially his head, was his top feature in this fight, his hand speed as well doing him justice. He made the slower man miss on so many occasions and then threw punches of his own in return. Haye showed he had a good boxing brain to be able to know when to mix it up and when to stay back which kept him out of trouble. This was better than the sluggish Valuev who just did the same thing over and over again. Haye’s accuracy with his punches was fantastic as well, landing way more punches than Valuev and yet throwing less. Valuev has always been renowned for his great chin and yet Haye still rocked him in the final round.

This fight is being compared on some levels to the fight between Froch and Dirrell. Froch was the aggressor in this fight and Dirrell ran for 12 rounds pot shotting Froch and yet Dirrell was ‘robbed’. How would some of the American fans go about fighting Valuev because you obversly think Haye did it wrong … 1 name springs to mind…

This fight was a fight to make fights (apologies for having the word fight three times in a sentence). If Haye defeats John Ruiz in his mandatory defence (which most people are confident of him doing) then he will be set up for fights with either of the Klitschko brothers. Either fight will be a mega money event and will make him a house hold name if he is to defeat them.

However that is the question. Will he defeat them? His hand and body speed is amazing. His power could knock out a lot of heavyweights, especially ones with a chin like Wladimir Klitschko’s. His jab is under rated and he should use it more to his advantage. And last but not least his accuracy is better than expected, especially in the Valuev fight.

All these points are well and good but the Klitschko’s are no push overs. At 6ft 6in (wladamir) and 6ft 8in (Vitali) these guys aren’t small, even compared to big Valuev. Their jabs are the best in the business and although they are boring, it works! Their hand speed is under rated and that mixed with their unbelievable power and punch output is amazing.

So for my opinion. I think Vitali Klitschko is just one too far for the Brit Haye. Although he is fast and may be able to stay away from the big man for a few rounds or so Vitali Klitschko will eventually catch up with him.

Wladimir Klitschko on the other hand could be an opponent for Haye to beat. His chin is weaker than that of his brother’s and he has that shorter reach and height for Haye to work with. I still think this fight would be 50/50 though.

So finally in conclusion I would recommend to Haye (if your reading this David) that he fights someone like Chriss Arreola, Samuel Peter or Alexander Povetkin. These fighters are all highly ranked but all flawed in some way and Haye could box rings around all three, meaning he could get valuable experience, with big names, to prepare for the Klitschkos, and we don’t have to watch one of the Klitschkos defeat them in some boring manner.

How Hatton should come back »