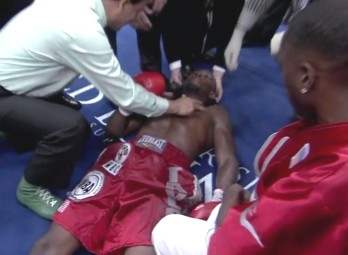 By Jordan Stoddart: Good day Boxing fans on both sides of the Atlantic and the millions watching worldwide! I thought it would be worth covering the most topical issues on this site, taking a lighter and fresher approach to some of the stuff floating about, maybe take a different angle to alienate the biased and nationalistic views that can sometimes crop up and cloud the sport. Here’ the weeks news in Bitesize.

Probably the most talked about subject this week, bar Pacquiao. And probably involved in one of the worst fights of 2009. Dirrell won some applause for his speed, athleticism and foot movement, but do not be fooled. This is not gymnastics, this is Boxing, and come to think of it, it’s a Round Robin tournament giving extra points for KO’s god dam it! Sure Froch has his flaw’s, but like most fighters in his rich line of descendants, he has maximized his attributes; punch resistance, stamina and heart. Check Joe Calzaghe (and Paulie Malignaggi’s) world titles whilst fighting with brittle hands, maximizing their speed and work rate, and also Hatton’s blatant lack of technical skills, but the ability to become one of the world’s biggest grossing fighters and again winning titles in 2 weight divisions. Carl Froch is still the proud owner of the WBC super middleweight belt; he is making his defences, so give some slack. On the other hand, if Dirrell could adopt a logical stance, and employ some sound fighting strategies, you might just find the next Mayweather in there. Some of his combinations were blinding and awesome at times, but failed to employ a killer instinct. Overall a poor fight, but a prime example of how the paying public can fall victim to the aged old cliche: styles make fights. Quite clearly emphasized at 0400 GMT on Sunday, minus £15 for your troubles. The upside? Froch V Kessler looks set to be a treat.

The first leg of the Super Six Series was an entertaining fight, with a much predicted outcome. Abraham’s exaggerated peek-a-boo stance came across as quite frustrating at first, but obviously playing to Taylor’s stamina problems (evident against Froch and Pavlik) he upped his game at around the 7 mark, and viciously KO’ed the former champ, only seconds later than the time he was knocked down in the last outing. Now. It’s not often morals come into play in Boxing, but in this case it should do. Someone has to have a heart and tell him it is over. I personally feel that a replacement should be made as soon as possible, but there is only one man who can make such a judgment, and that’s the fighter. I find Jermain Taylor a genuinely likable, hardworking and level headed guy, who has had some great success in the ring, but it would seem he never recovered from his first ever knock out loss. His career of late is what would pretty much happen to Hatton should he ever consider to continue. Brutal. Demoralizing. Career ruining. Soul destroying; when you lose by KO, or you have to be taken to the hospital in a stretcher after a fight, your manager/promoter should step up and be the man he probably promised he would be when the contracts were initially signed. Too many promoters and managers speak a good game, and claim to be ‘father figures’ as well as businessmen, but how many have the heart and balls to put a human life before the big fat dollar? My bet is not many. Please disprove me Mr. Al Haymon.

* Also worth bigging up Abraham whose comments about Taylor were very refreshing and show a true warrior’s heart. “The win means nothing until I know Jermain is OK, he’s a great fighter.” And you’re a true gentleman Arthur.

– David Haye losing fans fast but does it matter?

So far David Haye has accounted for 60% of the column inches dedicated to pugilism in the UK’s press as of today. (I like to keep the cut outs. It’s sad, but hey, a Lunar Eclipse happens more often than positive and regular press of the sport these days.) As expected, most have involved pre-fight trash and ridiculous stunts involving cardboard cut outs and Halloween masks. To the trained observer, it is seriously cheesy and poorly orchestrated, and in all fairness is a bloody embarrassment! But to the PPV fans who have already bought into buying ‘David V Goliath’, its very entertaining and “reminds me of that Apollo Creed from the Rocky movies.” *downs another beer* Apollo had far better taste and humour, and possessed a better trainer at that! Haye seems to be getting above his station. He has already let down his UK fans with the 2 proposed K fights, the yanks are seriously peeved and are not buying this fight, and do not forget the self confessed Hayemaker will be dropping bombs on a 7”3 giant, not a cruiserweight. It’s called David V Goliath for a reason: He won’t win! It doesn’t matter if he is from your country, if he is flash, if he is the man, and he was the undisputed cruiserweight champion of the world; nature dictates big men beat little men up; period! Again, prove me wrong Haye.

– Predictable Pac theme in lead up to ‘Fire-Power’

Once again the people who dismiss Manny Pacquiao as a fluky P4P champ have changed their stories. Out of the conversation comes Marquez, and a whole new debate about whether Pac is truly great or truly lucky rules the Net. On the ‘for’ side are the majority. He is a national hero, a speedy, extremely exciting and granite fighter who captivates the minds of fans more than Mayweather ever will. On the ‘against’ side is a whole host of people claiming that his victories over Hatton, Diaz and DLH had their own circumstances, and he has used that to his advantage in the rankings. Hatton was shot/had a bad training camp etc, DLH was drained and Diaz was not a worthy champ. We have heard that before. So can we honestly really say that if Pac defeats Cotto that he is the undisputed best fighter on this planet and deserves to sit alongside the likes of Leonard with his titles in 7 weights? I would love it if it did, but fact is, the same chaps saying Cotto will destroy Pac and profusely claiming him to be ‘the animal of the welterweight division’ will revert back to Cotto’s devastating loss to Margarito and his narrow win over Clottey. Funny old game init?!

– Rumour Mill: Bits and Pieces from across the world.

Rumour is Juan Manuel Marquez, recent victim to Mayweather, is holding out for a potential fight in the UK in the New Year, although not as expected against Ricky Hatton. Apparently the former has come to his senses and will be retiring for good. Amir Khan is likely to be the next opponent for JMM, at welterweight. Staying in Europe, a number of sources in the Klitschko’s camp claim that they will never fight David Haye, regardless of his result against Valuev in November. Either supreme confidence of their suspected result at the Haye fight from their part, as their aim is to retire with all belts in their possession no? Expect another dragged out process and for the plans to fall apart for a few more years to come.

An alarming amount of fight insiders are reporting that a fight with Pacquiao and Mayweather will never happen due to the latter’s stance on split of purses. Mind you, Pac did back down over the Hatton fight, but that was accounting for UK PPV’s. One such cynic is Bob Arum which is worrying. Apart from this proposed super fight, SuperSix series should gear up to be the most exciting event of next year with proposed bouts involving Kessler, Froch and Abraham. Some touted other participants in case of retirement include Bute and Calzaghe, both of which are unlikely but nice to think about. Expect Green or Bika to take over Taylor’s pay check. jordanboxing@live.co.uk

« Pacquiao vs. Cotto: May the best man win

Hatton could come back for Mayweather bout – Boxing News »