Abraham wins with impressive 12th round knockout over Taylor 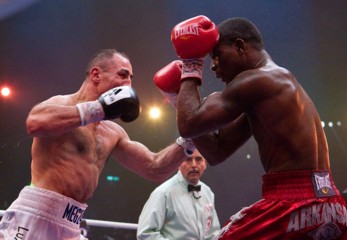 Abraham improved his unbeaten record to 31-0 with 25 KO’s while Taylor fell to 28-4, 3 of his 4 loses coming by way of KO. Abraham will go on to fight Andre Dirrell in the next round of the Super Six.

This was how tonight’s fight unfolded to a sellout crowd of 14,000 in Berlin, Germany.

Round 1 Taylor came out using his jab while Abraham employed the peak a boo defense; after blocking a few of Taylor’s shots Abraham threw a solid combination and went right to the body of Taylor. Just before the closing bell Taylor landed his jab. Taylor’s round

Round 2 Taylor came out jabbing, Abraham blocked most of the jabs; Taylor landed a low blow, Abraham was given the standard 5 minutes to recover which he used less than a minute. Taylor caught Abraham with a left hook, Taylor’s jab’s became more affective,; Abraham came back landing 2 right hands to the back of Taylor’s head just before the round ended. Taylor’s round

Round 3 Taylor came out throwing his jab; Abraham countered with a combination to the body. Abraham’s punches were wide and Taylor stepped in and landed a solid body shot. Abraham began scoring with his jab. Abraham again landed a shot to the back of Taylor’s head at the end of the round.

Round 4 Taylor came out more aggressive throwing his jab; Abraham stayed on defense occasionally going to the body. When Abraham throws his combinations the crowd erupts. In the last minute of the round Abraham began throwing and landing his jab. Abraham landed another right hand behind the head.

Round 5 in this round Abraham put his hands down and began throwing more punches countering Taylor. Abraham’s right hand found a home against Taylor’s head. Both men exchanged punches in thue center of the ring; it was Abraham’s best round.

Round 6 Abraham came out strong and landed a solid right hand; Abraham was a lot more aggressive landing a solid body shot, he pushed Taylor back. Taylor had a point deducted for excessive low blows. Taylor threw single jabs Abraham landed a solid combination to Taylor’s body. Abraham began having his way with Taylor by the end of the round.

Round 7 Taylor came out throwing his jab, Abraham countered going to the body and landed a solid uppercut. Midway Taylor began to fade as Abraham took advantage going to the body with a solid combination. Abraham was throwing hard shots going for the knockout; the crowd was so load the fighter’s barley heard the bell. Abraham clearly out jabbed Taylor.

Round 8 by this time Abraham clearly controlled the offensive flow of the fight. Abraham had his hands at his side dodging Taylor’s jab and throwing combinations. Abraha m began walking Taylor down and throwing and landing his jab at will.

Round 9 Taylor came out throwing his jab; Abraham landed a right hand that rocked Taylor; the crowd erupted as Abraham had control but didn’t finish Taylor off. Taylor managed to regroup himself and finish the round.

Round 10 Taylor came out throwing his jab, Abraham missed with a wild right hand. Abraham landed a stiff left jab, Taylor countered. Abraham came back with a flurry of punches to the body. Abraham landed the more solid punches winning the round.

Round 11 Abraham took control and had Taylor on the ropes, Taylor spun out traaded jabs in the center of the ring, again Abraham had Taylor backed up landing his combinations. Abraham landed punches at will until the end of the round.

Round 12 Taylor came out throwing his jab and Abraham countered back landing the more accurate punches. Taylor wasn’t able to get through Abraham’s defense; Abraham landed a right to the head; with less than 30 seconds Abraham dropped Taylor with a right hand shot that knocked Taylor out cold. The punch went through the defensive arms of Taylor.

« Abraham Knocks Out Taylor; Look for Froch to get beaten later tonight